Get the app Get the app
AOPA Members DO more LEARN more SAVE more - Get MORE out of being a pilot - CLICK HERE
News & Media Drive it, fly it: 'Flying car' brings GA to auto show 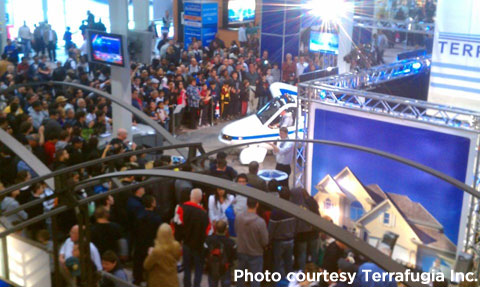 Attendees at the New York International Auto Show flocked to the Terrafugia exhibit five times a day to watch one of the show’s most unusual automobiles stretch its wings.

The Woburn, Mass.-based startup exhibited its Transition street-legal airplane at the auto show in lieu of attending the traditional general aviation haunt Sun ‘n Fun hoping to reach a wider audience and test the market for the light sport aircraft among nonpilots—and the gamble paid off. The aircraft drew international media attention, generated leads on an order of magnitude higher than at a major GA show, and, perhaps most surprisingly, sparked widespread interest in light GA and the prospect of learning to fly.

The auto show features sensational new cars and trucks, 60 of which had never been seen before in North America, but producers always look for something memorable to highlight beyond the traditional automotive offerings, said New York International Auto Show public relations spokesman Nick Crispe. The Transition fit the bill; when Crispe checked the “Buzz Index,” which measured real-time online chatter about companies and products at the show, the Transition was almost always at the top for special exhibits. Visitors at the Terrafugia display were often 10 deep for frequent wing-folding demonstrations, Crispe said, adding that the “flying car” was among the motivating factors for some people to come.

“Our attendance was absolutely through the roof this year, and I think Terrafugia was part of that,” he said. In addition to the novelty of a flying car, he said he thought people were drawn to the Terrafugia exhibit because it was exciting to lend support to an entrepreneurial company: “It’s something new. It’s something American. The owners and founders are young.” And the engineering took the technology on display at the show to a new level, he said.

And, of course, there’s The Jetsons. The Transition doesn’t promise that kind of sci-fi mobility, but the prospect of a credible flying car captured the imaginations of attendees and media alike. For the major television networks, print and online news outlets, and radio stations that highlighted the aircraft, Jetsons references proved almost irresistible: A Google news search from the days of the auto show reveals 84 results for the words “Terrafugia” and “Jetsons.”

With attendance of more than 1 million April 5 through 15, the show put the Transition, and GA, in front of a vast audience of nonpilots—nonpilots whose affinity for cars and “gearhead mentality” makes them strong candidates for learning to fly, according to Terrafugia Vice President of Sales Cliff Allen. The company logged 250 qualified leads—compared to the 25 it might get during an EAA AirVenture—and took three deposits at the show, he said. He said Terrafugia estimates it will see total deposits increase between 13 and 20 percent because of the auto show, citing such factors as the large New York City market and significant media buzz.

The Transition production prototype made its first flight in March, and the company has said it hopes to begin deliveries in 2013.

Allen said he spent most of his time at the exhibit talking about how aviation is accessible, and he was surprised that so many people were interested in learning more about how one learns to fly.

“I’ve done more talking about learning to fly this weekend than I have, really, ever,” said Allen, a CFI, after the first weekend of the 10-day show.

The most common question employees fielded, he said after the show closed, was, “Do you need a pilot’s license to fly this thing?” Yes, they’d tell the attendees, but the relatively new sport pilot certificate makes earning one easier than ever: In as little as 20 hours of flying, but more realistically 30 or more, they could access a network of thousands of small airports across the United States.

“They were all very surprised,” he said. “They think about aviation as airlines, and they thought the Transition was jet-powered” and could fly only into large airports like JFK or LaGuardia. The company didn’t intend to go evangelizing about flying, he said, but it ended up that way.

The team wrote the Web address of the Experimental Aircraft Association’s online sport pilot resource on cards for attendees who wanted to find out more; EAA spokesman Dick Knapinski said the organization saw a modest uptick in calls and emails about the certificate. “It’s good to see that we have a chance to take aviation and reach out beyond our normal audiences,” he said. Now it remains to be seen how many people will take the step to find a flight school.