Get the app Get the app
Already a member? Please login below for an enhanced experience. Not a member? Join today
News & Media Many pilots play roles in next chapter of spaceflight

Many pilots play roles in next chapter of spaceflight 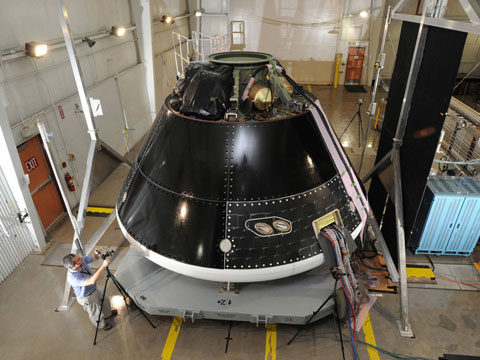 Orion manned spacecraft has a similar look to its Apollo ancestors, but it is larger and incorporates new technology. NASA photo.


In his spare time, Chris Johnson is preparing for his instrument rating checkride. By day, he’s managing a NASA project, testing parachutes for the Orion manned spacecraft.

Johnson, an AOPA member who just completed his first flight review as a private pilot, said flight training has proved its worth on his day job.

Habits and practices reinforced in the cockpit and ground school have helped him in his work at the NASA Johnson Space Center: “The same types of forward planning, staying ahead of the curve, and using checklists,” Johnson said, noting his CFI is a NASA veteran; many NASA employees and contractors working to put America back in the business of manned spaceflight also are pilots.

“They’re all over,” Johnson said. “With an interest in space, it just (follows) that there’s an interest in aviation. There are a lot of pilots here at the JSC.”

Orion is on track for a 2014 test launch, and the team Johnson leads is among many working to test the systems that will launch and land a capsule flying higher and faster than any since Apollo journeyed to the moon and back. The Orion crew capsule will break free of low orbit, climbing 3,600 miles above Earth—15 times higher than the International Space Station, the current outer limit of manned spaceflight. When it returns, Orion will require state-of-the-art heat shields to survive reentry heating to 2,000 degrees Fahrenheit, hotter than any spacecraft has endured since Apollo. At 25,000 feet, a series of parachutes will begin to deploy, slowing the hurtling capsule to about 17 mph for splashdown.

The first in a series of parachutes extracts an Orion test capsule from a C-130 at 25,000 feet during a NASA test. NASA photo.


The Orion astronauts will occupy the largest manned spacecraft in history, and rely on a series of parachutes led by drogue and pilot canopies that ultimately inflate three landing parachutes designed to open in stages lest the full canopy suffer too much stress during the rapid descent. The most recent test, on April 17 in Arizona—the same day the space shuttle Discovery was flown to its final stop—tested the landing parachute’s ability to skip a stage, open more quickly, and still survive. Johnson said the Kevlar and nylon canopies have held in every scenario tested so far, including drops using a full-scale stand-in for the Orion capsule, and drops using a bullet-shaped dart that falls much faster, matching the speed of the actual reentry vehicle.

Orion’s ultimate mission has yet to be defined, but it is a direct descendent of Apollo and capable of reaching the moon—and beyond. Expeditions to asteroids and interplanetary travel are also possible. The Orion parachute system is similar to the system that safely returned the Apollo capsules, Johnson said. 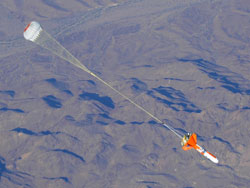 A parachute deploys from the bullet-shaped test capsule used by NASA in April to test the parachute system designed for the Orion manned spacecraft. NASA photo.

“It reaches all the way back to Apollo in terms of the configuration that they used,” Johnson said, “and the data that they were able to collect.”

The new test project has also drawn on lessons learned by the military, which developed the air drop techniques used by the NASA team with some added twists. The drop tests are made from C-130 and C-17 aircraft, and a series of parachutes extract a cargo sled from the aircraft that carries the test capsule (or dart) to 25,000 feet. After parachutes pull the experiment sled clear of the aircraft, others are used to separate the test vehicle from the sled so the test parachutes can be deployed. On the first test using a full-scale capsule in February, 17 parachutes were deployed: nine used to extract the capsule and set it up on the desired trajectory, and the remaining eight part of the recovery system itself.

“It adds another level of complexity,” Johnson said.

The next test will be conducted in July, and the program has thus far produced no unpleasant surprises. “We haven’t seen any significant failures that have suggested a need for a design change,” Johnson said.

Once testing is complete, the product of the efforts of Johnson and his team will be matched with components and systems being built by NASA staff and contractors around the country. Lockheed Martin is the primary contractor, managing the efforts of dozens of firms and research centers collaborating on an historic next step in human space exploration.