Get the app Get the app
Already a member? Please login below for an enhanced experience. Not a member? Join today
News & Media Groundswell of opposition halts bid to ground warbirds

The Commemorative Air Force put its B-29 Superfortress Fifi (seen here at Sun ‘n Fun) front and center in its battle cry against a legislative push to ground warbirds.


The nation’s airworthy warbirds have survived, for now, another attempt to knock them out of the sky.

Rep. Sam Graves (R-Mo.), co-chairman of the House GA Caucus, worked with AOPA, EAA, and many other organizations to rally opposition to a potential amendment that would have banned the transfer of military aircraft to civilian operators who planned to fly them. The amendment would have jeopardized existing agreements and grounded all American warbirds.

Graves said the apparent reversal of support for the amendment, which never made it to committee consideration, is unlikely to be the last battle to keep history alive. It was by no means the first.

Word of the proposed amendment traveled fast in recent days among the wider warbird community, prompting outcry from individuals and organizations such as the Commemorative Air Force, operator of 156 vintage aircraft including Fifi, the last flying B-29 Superfortress in the world.

Rep. Michael Turner (R-Ohio) responded April 21 to a CAF announcement that Fifi is “under attack” with a statement that the amendment he was poised to propose would not apply to “propeller-driven” aircraft.


“My concern lies in the potential for military jet aircraft to be transferred to civilians for flight without the same rigorous training and maintenance schedules that pilots and aircraft underwent when they were in service,” Turner wrote.

Graves said that argument comes directly from the U.S. Air Force, with similar language found in a “deeply flawed” 2011 report by the Department of Defense that made a case against allowing civilians to operate military jets. Graves called the Pentagon’s assessment “extraordinarily arrogant,” and ill-informed when it comes to organizations like CAF and the Collings Foundation, which have a wealth of expertise and experience operating vintage warplanes—including jets—with many veterans among the ranks of these organizations.

“They never once called any of these organizations that are flying these aircraft,” Graves said of the Air Force research.

Turner, who represents the district home to the National Museum of the U.S. Air Force, cited the 2011 Pentagon report in his rationale.

“This didn’t originate from Congressman Turner,” Graves said, adding the U.S. Air Force has a policy against the transfer of retired aircraft to civilians, and has long fought to make the practice permanent—and apply it to aircraft like Fifi.

“The policy is just flat wrong,” Graves said. “There’s been several attempts to try to do this, to codify into law what the Air Force is already doing.”

Collings Foundation Executive Director Rob Collings said it is a tiny but powerful minority within the Air Force that seeks to end warbird flights, and his organization is preparing a detailed response to the report, which he said contained many inaccuracies, including the claimed concern that aircraft would be operated by inexperienced personnel. 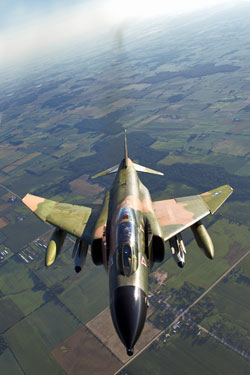 “In fact, our pilots have more time in type than most of the military pilots who are flying today,” Collings said. “One of our F-4 pilots has close to 5,000 hours of time in type.”

Collings said there is a place for both static displays and flying aircraft in the missions of honoring veterans and teaching future generations. Ironically, as the battle over Turner’s would-be amendment was reaching a crescendo, the Air Force wrote to the Collings Foundation seeking help gathering airworthy Vietnam-era aircraft for a tribute show. At the top of that wish list was the F-4 Phantom, and the Collings Foundation operates the United States’ last airworthy example.

All of the foundation’s military jets are operated under intensive FAA oversight, by highly trained and experienced crews, Collings said, and they are not intended to replace the displays found in museums around the country.

“I think the Air Force museum is one of the greatest museums in the world,” Collings said, adding that static displays and flying aircraft “both serve a very important purpose.”

Collings noted that the recent commemoration of the Doolittle Tokyo Raid drew huge crowds to the Dayton museum.

Graves, Collings, and leaders of other warbird organizations said that while they fully expect future attempts to clip the wings of vintage military aircraft and relegate them to museums, it was encouraging to see so many pilots, warbird enthusiasts, and lawmakers rally quickly.

“It was wonderful to see how quickly the community rallied,” Collings said, adding he is particularly grateful to Graves and his staff for their efforts on behalf of flying warbirds. “We have an advocate there in Congress.”

"We are grateful to Congressman Graves and others in Congress who helped give a voice to the warbird community and we will continue to fight against any efforts to ground them" said Lorraine Howerton, AOPA vice president for legislative affairs.