Airport (and a dream) for sale in Illinois

It all started when a Midwestern farmer plowed up his corn to pursue a dream.

But there was still a cold, hard world out there, and eventually the dream fell into jeopardy.

Sound like the plot of a motion picture about an Iowa farmer and a baseball diamond?

Not this time. Cut to Wonder Lake, Ill., where Arthur T. Galt Jr. made a dream come true in 1950 by building an airport in the middle of a field of corn.

Galt’s airport changed hands, but his dream has endured until the brutal conditions of the current real estate market have put the continued existence of his airport in question.

Is there enough magic out there in the moonlight to save it?

As local pilots tell the story on the airport’s website, farmer Galt and his wife Vera became smitten with aviation after discovering that an airplane ride could cut down drastically on the time it took to reach a favorite fishing spot. Galt soon bought an airplane and learned to fly it, using his farm as his landing strip. Other pilots began using the place, improvements were made, and Galt Field began to grow.

Much later, a successor property owner pursued even grander plans for expanding the property, said real estate broker Warren James of the Kinzie Group. But when market conditions turned adverse, and the debt load became unsustainable for that owner, the airport entered bankruptcy receivership. 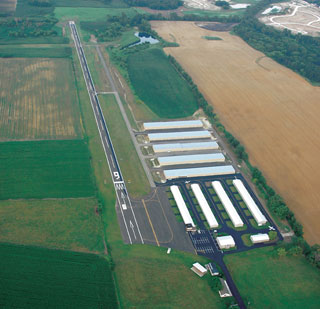 James offers this way of looking at it: You couldn’t replace the airport, with its renovated farm house, 19 other buildings, fixed-base operation, hangars, maintenance shop, and 2,500-gallon fuel facility, for that money.

“Given the state of the real estate market, this is a unique opportunity to own a very valuable asset,” he said in a phone interview.

You’d also be providing serious peace of mind for a community of aviation buffs who spend their free time and most Saturdays at the airport, making it the special kind of place that pilots everywhere yearn for.

Those folks go by the name of the Friends of Galt, or FOG. Their ranks include two full-time employees, hangar tenants, pilots, student pilots, and other all-around aviation buffs. There was even a book written about Galt Field: Laurence Gonzales’ 1995 work, One Zero Charlie: Adventures in Grass Roots Aviation.

You can find Galt Field listed in AOPA Airports, and 10C appears on the Chicago sectional aeronautical chart slightly northwest of the 30-mile-radius Mode C veil of Chicago’s Class B airspace, just south of the Illinois-Wisconsin state line.

With a paved 2,802-foot runway and an unpaved 2,141-foot strip, Galt Field is a place to fly, to learn to fly, and to immerse oneself in aviation, say its denizens.

James said he was determined to find someone to continue the tradition, and he has discussed the property with prospective buyers who expressed “strong interest.”

If selling an airport seems like a rather specialized project for a real-estate professional, James, a 3,000-hour pilot, walks the walk and talks the talk without special effort.

An engineering graduate of the University of Illinois who took ground school while in high school, he used his college free electives to earn his private pilot certificate, and added an instrument rating shortly after graduating. Later he acquired commercial, multiengine, and flight instructor privileges. A 28-year AOPA member, James has owned a Piper Saratoga, a Piper Seneca V twin, and now, a Citabria.

The real estate market has taken its toll on properties, but James believes that for Galt, “the highest and best use is the current use, as an airport.”

Market realities may also have performed a service of sorts by bringing everything back down to earth a bit.

Dan Namowitz has been writing for AOPA in a variety of capacities since 1991. He has been a flight instructor since 1990 and is a 35-year AOPA member.
Go to Dan Namowitz's Profile
Topics: Airspace, Financial, Aviation Industry