Get the app Get the app
AOPA will be closing at 2:30pm ET Wednesday, November 23rd, and will remain closed Thursday and Friday in observance of the Thanksgiving holiday. We will reopen Monday November 28th at 8:30am ET.
AOPA Members DO more LEARN more SAVE more - Get MORE out of being a pilot - CLICK HERE
News & Media Homegrown effort builds aviation interest 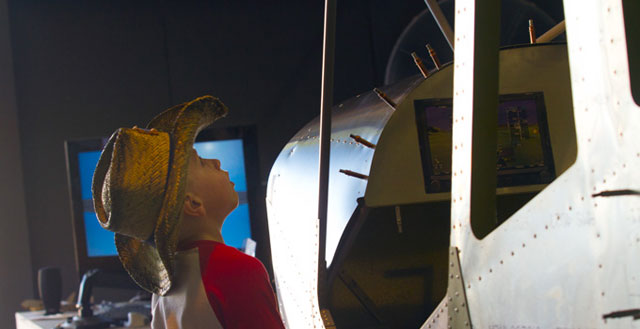 Van Handel, 5, checks out the Zenith CH 750 fuselage being built by teens participating in Aviators By Design, a local nonprofit based in Iola, Wis.

Susanne Stalker flashed a smile as she turned briefly from the job at hand: driving rivets into an airframe being built with high hopes. Stalker, 15, and half a dozen fellow students were well on the way toward the goal of completing a Zenith CH 750 fuselage. Backed by an equally enthusiastic corps of volunteer mentors and pilots, she and fellow participants in a youth aviation program in Iola, Wis., will one day take to the skies in an airplane they built with their own hands. 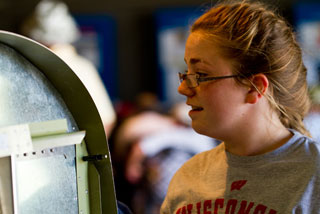 Susanne Stalker, 15, is getting hands-on experience building a kitplane, and is eager to learn to fly it once it’s complete.

“I like seeing it come together. I like building, I like the hands-on work,” Stalker said. She has been studying engineering since seventh grade, and aspires to be an aeronautical engineer—and a pilot. She’s the “star player” on the close-knit team of aspiring aviators and their mentors assembled by Jerry Graf, who created a nonprofit organization to help ensure the future of general aviation, and Central County Airport near Iola in particular. Retired from the food service industry, Graf has spent two years assembling a team and reaching out to like-minded organizations and educators, and collecting donations—including the Zenith CH 750 kit donated by Zenith Aircraft that was under construction in the Homebuilder’s Hangar during EAA AirVenture. Aviators by Design, the nonprofit Graf founded to coordinate donations, and create school-based education programs and hands-on aviation for youth, had launched its first build.

“We have the potential to reach every kid out there,” Graf said, noting the close collaboration with teachers and administrators as eager to revitalize STEM education as Graf and his collaborators are to boost the flagging pilot population. “If we can do what we’re doing in Iola, Wisconsin, it can be done anywhere in the United States.”

Flight instructors have already volunteered to donate their time and expertise for the next phase: teaching the students to fly the Zenith once it is complete. Graf, who has financed much of the effort himself, noted it will take some doing to secure the powerplant and avionics, and donations are both welcome and tax-deductible.

Graf plans to work with similar organizations such as Build A Plane, which is working on a national scale to foster aviation education by placing donated aircraft in high schools for students to work on and learn from. The focus is also very local: Central County Airport is backed by more than 1,000 members, though many of them are advancing in age. Some say the airport will be a very different place in a decade.

“I want to be one of those guys that’s going to do something about it,” Graf said. “I don’t want the airport to die. It’s too important.”