Get the app Get the app
Already a member? Please login below for an enhanced experience. Not a member? Join today
News & Media Detroit Class B plan ignores GA's ideas 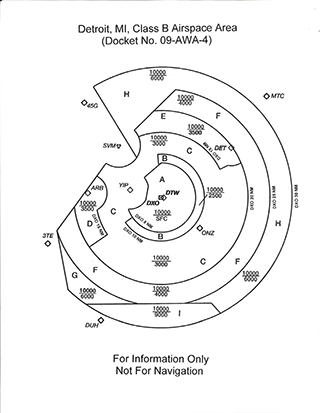 AOPA has expressed disappointment that the FAA has made only minimal changes to a proposal to modify and expand Detroit’s Class B airspace despite substantial burdens the plan would impose on general aviation operations.

AOPA will reiterate those concerns in formal comments on the NPRM, and urges members to study the plan and take the final opportunity to submit comments by Oct. 15.

“This proposal largely expands and lowers the Class B airspace, and should be a concern for all pilots who operate in and around the Detroit area,” McCaffrey said.

Throughout the airspace evaluation process, AOPA has described the FAA’s proposal to raise the ceiling of the proposed Class B airspace from the current 8,000 feet to 10,000 feet msl as unnecessary and unjustified for safety or containment of aircraft. The association also pointed out that some of the country’s busiest Class B airspace functions with ceilings lower than 10,000 feet.

AOPA also questioned the need for lateral expansion of Class B airspace sectors to 30 nm, out from 25.

The proposal also fails to incorporate the association’s recommendation to raise the floor of outermost ring’s sectors from 6,000 feet msl to 8,000 feet msl (see the accompanying diagram).

Given the repercussions for general aviation, AOPA strongly urges members to act on their final opportunity to respond to the proposal by submitting comments online by Oct. 15 citing FAA Docket No. FAA–2012–0661 and Airspace Docket No. 09–AWA–4, or by mail to U.S. Department of Transportation, Docket Operations, M–30, 1200 New Jersey Avenue SE., West Building Ground Floor, Room W12–140, Washington, DC 20590–0001.