Get the app Get the app
Already a member? Please login below for an enhanced experience. Not a member? Join today
News & Media Fuel from plastics to be used on intercontinental flight

Fuel from plastics to be used on intercontinental flight

Australia insurance broker Jeremy Rowsell hopes to fly a diesel-engine Cessna 182 from Australia to London on “Wings of Waste” using fuel made from plastics that can no longer be recycled. The fuel, which meets spec but has never been tested on an aircraft, will be donated as soon as Rowsell convinces sponsors to support his risky trip.

The Cessna 182 he hopes to use with its SMA diesel engine was announced during the recent EAA AirVenture 2012 in Oshkosh, Wis. It is diesel fuel made to EN 590 specification, which is a standard in Europe for automotive fuels. It is not Jet A. 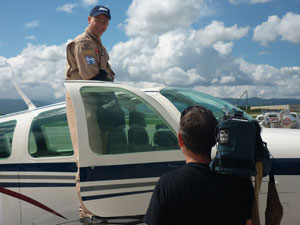 His cause is in no way helped by a video pointing out the dangers that face the flight. It shows him dashing through scary night scenes apparently being pursued by armed bad guys as part of his decision training. Because of the risks, sponsors have so far refused to climb aboard the project.

The best time for the flight, according to the stockbroker’s website, is October, but Rowsell’s blog indicates it is more likely to be spring or summer of 2013.

The fuel will be made by Cynar in Portlaoise, Ireland, in six weeks after getting the go-ahead from Rowsell. It will be positioned along a 10,000-mile route from Sydney to London by his crew. Cynar CEO Michael Murray said his company sells the technology to make the fuel, rather than the fuel itself, to corporations wanting to rid themselves of plastics that are at the end of their lives and can no longer be recycled. Basically, plastic is heated and the fumes are then distilled into fuel. It takes one ton of end-of-life plastics to make 185 gallons of diesel fuel plus 53 gallons of gasoline and 26 gallons of kerosene. Murray said he has a quarter-billion dollars’ worth of orders for the technology over the next five years. The cost of the fuel, he said, is 10 percent less than whatever fuel costs in your local market. Plastics are made from oil.

Cynar is developing a plant in England at Avonmouth, near Bristol, 112 miles directly west of London.