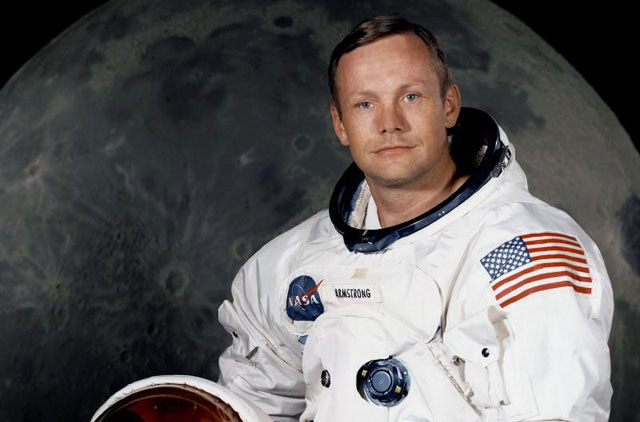 Apollo 11 Commander Neil Armstrong, whose “small step” marked mankind’s first visit to the moon, died Aug. 25 of complications following a cardiovascular procedure, according to his family. He was 82.

With Col. Edwin “Buzz” Aldrin reading out navigation data, Armstrong took control of the first manned lunar landing as the lunar module Eagle made a final descent to history. As an anxious world awaited news on Earth, the low-fuel alarm sounded, along with others that told Armstrong and Aldrin that the computer was overloaded with data and was shedding tasks to focus on the top priority: a safe landing. After touchdown, Armstrong and Aldrin continued to work the after-landing checklist items, completing the shutdown procedure before Armstrong informed Houston of a change in call sign: “Tranquility Base, here. The Eagle has landed.” 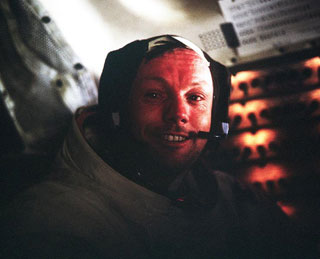 Armstrong in the lunar module Eagle on the surface of the moon. July 20, 1969. NASA photo.

President Barack Obama called Armstrong “the greatest of American heroes” in a statement. Apollo 11’s crew, the president continued, “set out to show the world that the American spirit can see beyond what seems unimaginable—that with enough drive and ingenuity, anything is possible. And when Neil stepped foot on the surface of the moon for the first time, he delivered a moment of human achievement that will never be forgotten.”

The president was among countless individuals and organizations paying tribute to Armstrong, who was inducted in the National Aviation Hall of Fame (NAHF) in 1979. In its own tribute, the NAHF noted that as a teenager in Ohio, Armstrong learned to fly before he drove a car, and later flew 78 missions for the U.S. Navy in Korea (including one in which he was forced to eject after an aileron tore loose). Long after Armstrong left his historic first footprint in the Sea of Tranquility, he continued to contribute to the advancement of science “as an engineer, educator, and public advocate,” the NAHF stated. “He humbly yet powerfully served in his unintended role at the top of the pantheon of exploration, using deliberate thought as to how best to appropriately encourage others to dream and achieve big, without personally exploiting his iconic status.”

Armstrong, who had worked as a test pilot prior to his astronaut selection, eschewed offers of top-level administrative jobs in the post-Apollo era to teach: He served for eight years as a professor of engineering and aeronautics at the University of Cincinnati near his home, where he also was a business and community leader. 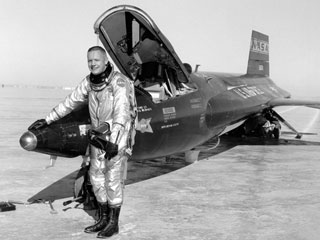 Neil Armstrong overshot Edwards Air Force Base in California during an X-15 training flight, turning back over the Rose Bowl in Pasadena at 100,000 feet, he just made it back to the lakebed. NASA photo.

Armstrong served with Jimmy Doolittle as co-chairmen of the fundraising effort that created the Charles A. and Anne Morrow Lindbergh Foundation, and joined fellow astronauts and other luminaries at the Manhattan Explorers Club in May, marking the thirty-fifth anniversary of the organization’s launch. At the time, Armstrong was planning the purchase of an aircraft to replace the Cessna 310 he had recently sold, and pushing America to continue to explore. Armstrong testified before Congress in 2010, urging continuation of manned space missions.

Armstrong’s family, mourning the loss of a beloved husband, father, grandfather, and brother, issued a statement in which “we also celebrate his remarkable life and hope that it serves as an example to young people around the world to work hard to make their dreams come true, to be willing to explore and push the limits, and to selflessly serve a cause greater than themselves.”

The family, in a statement issued through NASA, also made a request: “Honor his example of service, accomplishment and modesty, and the next time you walk outside on a clear night and see the moon smiling down at you, think of Neil Armstrong and give him a wink.”