Get the app Get the app
Already a member? Please login below for an enhanced experience. Not a member? Join today
News & Media Technique: Wind warrior

You just made the best landing of your flying life. So how come no one&rsquo;s applauding?

You just made the best landing of your flying life. So how come no one's applauding? 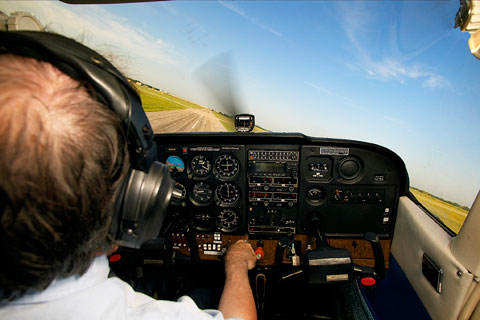 The passengers sit stone-faced as you taxi clear of the runway, hold short, and run the list. Suddenly gusts rock the airframe. Someone aboard invokes a deity to break the stunned silence, and nervous laughter follows. Soon, awkward one-liners and crash jokes are being exchanged in the cabin. Discouraging. As the saying goes, no good deed shall go unpunished.

Little do they know that this was no day for a pilot to pander to layman expectations of tires squeaking onto pavement in a touchdown so silky that a sleeping child would fail to rouse. Ugly is beautiful on days like this. Anyway, the ugliness is only skin deep.

You reach over to retract the flaps out of habit, only to remember that the flaps were never extended during this wild approach in 30-knot winds gusting to 40-plus from directions varying from a direct headwind to a substantial crosswind.

That wind variability made it hard to estimate a gust factor to add to your airspeed as the book says to do. So you took an average value and tacked it onto your approach speed, for better or worse, and then turned your attention back to getting down, firmly and under control, on the centerline, and pointing in the right direction. That was all that mattered. And you did a masterful job.

Interesting to reflect on just how much of your decision making occurred on an unconscious level. Now that you have time to do a post-mortem on your decisions, think about why you did what you did. You’ll find yourself recalling your earliest days of primary flight training, and the introductory lessons on basic aircraft control.

In those days of presolo innocence you learned that on a windy day, when conditions are changing rapidly, instantaneous and accurate aircraft responses to your control inputs are essential. There are two ways to get a big response from the aircraft. One is to fly at a normal approach airspeed and configuration, decelerating as usual, and applying bigger and bigger control deflections to maintain control in the capricious winds.

Even if the wind doesn’t beat you when you run out of control authority in that scenario, forget about accuracy with that method. Remember from your days practicing slow flight how drastically responsiveness to control pressures decays as airspeed is reduced, and how the drag induced by aileron deflection interferes with precision? There you sit, stomping on pedals and slapping the yoke back and forth, just to maintain the status quo—let alone correct any error. Wind shear or turbulence could induce a mush, a stall, or a drop-in.

Far better idea: Keep your speed up, for the added control that efficient airflow over ailerons, elevator, and rudder provides. Hold the pitch attitude lower than normal, right to touchdown. Then, rather than letting aerodynamic braking bring down the nosewheel in good time, lower it yourself, and let the pavement do deceleration’s dirty work. It’s not really an ugly landing; it just seems that way to a layperson who expected a ballet and got a wrestling match instead.

Now, about the flaps (and why you didn’t use them—or if you did, why you should consider not using them next time). Flaps, as the old knowledge test question stresses, steepen your approach, increasing the angle of attack—and therefore, drag—without requiring a power or airspeed change. But that’s the enemy of maximizing control at approach airspeeds. There’s the added concern about a possible go-around, and the sink that abruptly retracting flaps could cause.

Still, some pilots opt for partial flaps at times like this, despite understanding the reasons to avoid them. Some who don’t practice no-flap landings in calm conditions cite bad memories of
prolonged floats down the runway caused by their being reticent to use enough back-elevator to slow down with flaps up before entering ground effect. But a long float is unlikely on a day like this, when groundspeed is probably going to be pretty low in the strong (mostly) headwind.

The low groundspeed is your ally in another way: The ground roll will be short, reducing the time during which your aircraft decelerates through the poor-controllability airspeed range. On reaching taxi speed, use full control deflections to keep the upwind wing down—and the tail, too, once you taxi off the runway turn, and encounter any tailwind component during ground operations.

A word about takeoffs in this kind of near-gale weather: First, there should be a good reason for going—and there’s no claiming the element of surprise that may serve to mollify some of those passengers who got to witness your landing under these conditions.

Assuming there is a good reason—such as, you are an air taxi pilot departing on a revenue flight with the boss watching from the office window—the same attention to the detail of avoiding excessive angle of attack applies here, too. Accelerate promptly through the mushy-control phase, and wait for that nice firm responsive feeling on the controls before attempting to rotate. That’s not just to make sure that once you are off the ground, you’ll stay off (although that would be reason enough). The other governing dynamic here is to be able to control downwind drift in any crosswind. That’s especially important if you are departing from a strip bordered closely by trees or other obstacles.

Not that you’d ever try to get away with something like this, but on your next flight review or checkride, don’t try to pass off a too-flat, too-fast landing as an attempt to beat a blustery breeze when the wind is blowing just a few knots. It won’t fool the lady or gent with the clipboard who’s sitting next to you. Better to just admit that you’re rusty and promise to go out and practice real soon.

As penance for even considering such a ruse, go ahead and take this one-question quiz: Can you think of a circumstance in which it would actually be advisable to use the faster-than-usual-approach technique in no-wind conditions?

The answer is “Yes, with ice.”

Emerging from icy clouds after an instrument approach, or fleeing to the safety of a runway after an encounter with freezing drizzle or rain, it’s hard to know what kind of airfoil you are flying, and when it will decide to surrender its aerodynamic properties. And if you subscribe to the belief that the cockpit makes a poor classroom, it’s even worse as a research lab. From experience, be assured that you would be amazed, really amazed, at how little ice it takes on an airfoil’s leading edge to make a stall horn sing at moderate-to-high approach airspeeds (see “ Wx Watch: The Problem with Pireps,”).

Landing under that scenario, one key difference will be your groundspeed, which will have no headwinds reducing it as you near the runway. On landing, you will have to be nimble—an acceptable risk, considering the alternative of an abrupt, possibly asymmetrical stall.

Still unhappy about being panned by your passengers after that magnificent landing?

We’ve all been there. Maybe there’s some consolation in that.

Dan Namowitz is an aviation writer and flight instructor. He has been a pilot since 1985 and an instructor since 1990.