Get the app Get the app
AOPA Members DO more LEARN more SAVE more - Get MORE out of being a pilot - CLICK HERE
News & Media Friends rally to fulfill a pilot&rsquo;s final wish 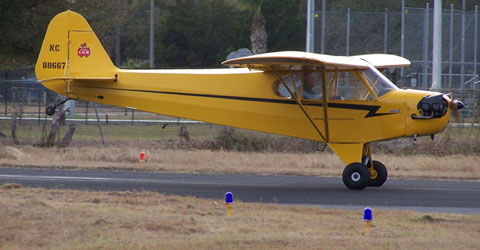 
Walter Crosby spent the last seven years of his life working on the Piper Cub he had dreamed of restoring since he paid $650 for the tattered two-seater in 1962. He had meanwhile raised children, worked as a police officer and tradesman, and earned an A&P certificate—restoring half a dozen other aircraft over the years. The Cub, stored in pieces around the family home, was for later, his wife said, a retirement project.

In October, Crosby and his wife, Geri, returned to Florida for a seventh winter of work on the Cub, and the sixth year of Walter Crosby’s battle against cancer. Walter Crosby and fellow EAA Chapter 282 member Bob Henry had forged a strong friendship working together on the 1946 Cub, and nearly finished it. But by late December, Crosby was quickly losing his strength.

Walter Crosby with his unfinished Cub in 2010.

“He started telling his friends at the airport, ‘I’ll never see it fly,’” Geri recalled. Crosby’s friends—Henry, John Shepard, Mike Canter, and Gino DiNucci—would have none of that.

DiNucci, an aviation mechanic with inspection authority (IA) who is working on a Cub of his own, among other projects, had promised Crosby that he would finish N88667 if Crosby lost his battle before the job was done. Now, the goal was to let Crosby see his Cub fly.

“We really wanted to get it done before he passed,” DiNucci said, adding the job was made easier by the meticulous attention to detail and skill with which Crosby and Henry had worked. (DiNucci said he has given many visiting friends a tour of Crosby’s home to show off his friend’s craftsmanship, and they are always impressed.)

A two-week final push of daily labor on finishing touches culminated Jan. 13, when DiNucci opened the throttle and lifted off from Clearwater Air Park, guiding Crosby’s Cub skyward for the first time since long before the 1962 purchase. Below, Crosby sat with his daughter in a chair by the window; his home overlooks the runway. 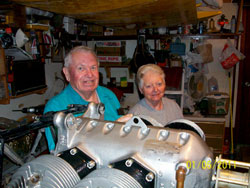 DiNucci flew a pass overhead to make sure his friend got a good look. Crosby mustered the strength to say three words about it to the Tampa Bay Times: “Enjoyed it immensely.”

Over the years, the Crosbys made 14 visits to the annual Sentimental Journey Fly In, celebrating Pipers in Pennsylvania. The sight of row upon row of gleaming yellow Cubs helped fuel the desire to get Crosby’s machine back in the air, and the project moved closer and closer to completion.

“Each year, we’d get more enthused,” Geri recalled. “It’s given us a lot of fun through the years.”

Four days after the first flight, DiNucci again guided N88667 to the runway, this time with Geri as a passenger, her husband watching from his window seat. Within hours of her return, Crosby slipped into a coma; he died Jan. 28. He was 74. A memorial service is planned Feb. 11.

Geri said the family is deeply grateful to the friends who rallied to make it happen.

“I think, especially at this time, it’s really, really helpful to me and the family, the gesture that they made and the fact that he was able to see a completed airplane,” she said. “You don’t find people like that.” 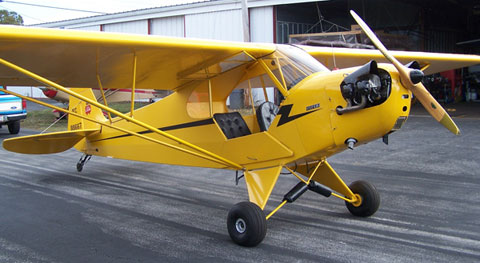 Members of EAA Chapter 282 in Clearwater, Fla., rallied around one of their own in January, working to finish the restoration of Walter Crosby’s 1946 Piper Cub so that he could see it fly before he lost his six-year battle with cancer.