Get the app Get the app
Already a member? Please login below for an enhanced experience. Not a member? Join today
News & Media After the accident: Will to survive

After the accident: Will to survive 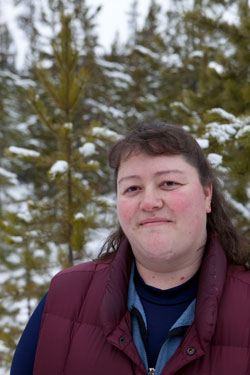 One week before her high school graduation, Dianna Miller was practicing Bette Midler’s “From a distance,” a song she was scheduled to sing during the ceremony. She was singing from the side of a mountain, lying beneath a wing of the Cessna 172 that had crashed, crushing her fourth lumbar vertebra, left foot, and right ankle. Her mother, who died on impact, lay on the other side of the aircraft. The pilot suffered broken legs and a crushed jaw but walked across the mountainous terrain between Troy, Mont., and Colburn, Idaho, to find help.

“I honestly thought I’d never see him again,” she said, recalling how serious her friend’s injuries appeared. It was May 24, 1992; she was 17, alone, dressed in a T-shirt and shorts, and unable to move much.

Miller, who works in the office of Christian Camp Bighorn in Plains, Mont., shared her story with 33 participants during the Surratt Winter Survival Clinic in January. The two-day, two-night clinic hosted by the Montana Department of Transportation Aeronautics Division teaches pilots skills to survive in the wilderness after an aircraft accident until rescue arrives. In Miller’s case, it took rescuers four days to reach her.

“Time really … I had no clue how much time was going by,” she said. For those four days, she sang, recited Bible verses, slept, and recalled the statistic her English teacher told her class a few weeks before the accident: One out of 50 students do not graduate. There were 50 in her graduating class. She was determined not to become a statistic. As Miller shared her story, occasionally tearing up while reliving those four days on the mountain, she paused, explaining, “Even though it’s been 20 years, stuff sticks with you, ya know.”

She had no food and drank only a handful of water that she collected by funneling rainwater through a self-made cone into a tiny hole that she dug. When she tried to stand up and walk, she immediately fell. Her limited mobility only allowed her to scoot forward and back under the wing, either into the sun for some warmth or back under the wing for shelter from the two days of rain.

She tried to wave as an aircraft flew overhead, but it turned and left. She was unsure if the pilot had seen her or the white wreckage—parts of the mountain still had snow patches, making it difficult to spot the Cessna 172. When the aircraft returned, the pilot waved to let her know she had been found. An Air Force helicopter lowered a basket and hoisted her to safety before she was airlifted to a hospital where she underwent one month of surgeries and was told she’d never walk again. Miller channeled the same drive that kept her alive to walk for her diploma months later.

“Your mindset, that’s what keeps you alive,” Doug Dryden, an instructor at the clinic, explained, “more so than your gun or anything else.” Miller is living proof.