Get the app Get the app
Already a member? Please login below for an enhanced experience. Not a member? Join today
News & Media After the accident: Fire and duct tape distress signals

After the accident: Fire and duct tape distress signals 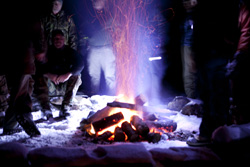 Mixture—idle cut off. Fuel shutoff valve—off. Ignition switch—off. Master switch—off. During the approach to a forced landing without engine power, pilots focus on securing the aircraft to prevent a fire upon landing. Prior to touchdown, the doors are unlatched to allow quick egress after landing, which is particularly important if the aircraft catches fire. After the forced landing, however, fire becomes a friend—especially in the winter while waiting for rescuers to arrive.

Fire not only provides heat, but is critical for water purification, cooking food, and creating a smoke signal (with a little help from duct tape); it also occupies time, something the pilot and passengers might have plenty of before rescuers arrive if the terrain or weather is particularly unforgiving. 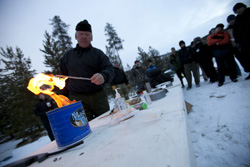 If the aircraft didn’t burn after the forced landing, parts of it can be used to start and keep a fire burning. If it still has fuel and oil, the two can be mixed and lit. In an outdoor version of a chemistry lab, game warden Perry Brown mixed three parts of fuel with one part oil and poured it over gravel in the bottom of a coffee can before lighting. Adding gravel or dirt to the bottom of the can makes the fire burn longer. Connecting wires to the battery and touching them produces a spark that can be used to light tinder. Instructors encouraged participants to be creative and use any available resources to start the fire, saying they were limited only by their imagination.

“If you’re feeling lucky, you could try a lighter, magnesium block, matches, roadside flare, binary jells, bow and drill, or a prayer stone,” the course equipment list suggested. The goal of the training exercise was to allow pilots to try building a fire, gaining confidence in the process so that if they truly needed to survive after an accident, they could start a fire. 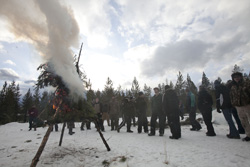 Retired Army Special Forces Master Sgt. Frank Bowen pointed out that while lighters are great to have, they don’t always work at elevation, can run dry, and can break; so have a backup such as stormproof matches or flint and steel to create sparks and light tinder. Cotton balls, dryer lint, gauze from a first aid kit, dried grass or cattails, and small twigs can serve as tinder. Coating cotton in petroleum jelly, antibiotic ointment, or lip balm, Bowen explained, will make the tinder burn longer to help build the fire. In addition to explaining how to scavenge for fire supplies, Bowen showed participants how to rip dead limbs from trees and knock over dead trees to use to feed the fire.

The fire can be used to start others for smoke signals—a useful backup to the aircraft emergency locator transmitter, a personal locator beacon, handheld radio, flare gun, or signaling mirror. During the clinic, instructors piled fresh pine boughs three feet high, lit a loosely wadded ball of duct tape on fire, and placed it under the pile. The duct tape burned slowly, igniting the boughs to produce a continuous, thick pillar of white smoke. “That kind of makes that duct tape like the world’s greatest thing, doesn’t it?” Bowen joked. He recommended building three piles in a triangle and timing the lighting to provide the longest continuous smoke trail.

“I didn’t know you could burn duct tape,” said Wade Cebulski, a Montana Department of Transportation Aeronautics Division employee who enrolled in the course, promptly adding that he would be moving a roll of duct tape from his tools in the back of the aircraft into a location easier to access after an emergency landing. “Now I’m going to put a small roll in my backpack.”