Get the app Get the app
Already a member? Please login below for an enhanced experience. Not a member? Join today
News & Media After the accident Tarp and stick digs

After the accident: Tarp and stick digs 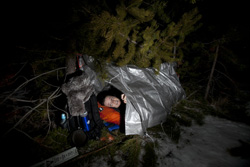 It could be a long wait—days—before rescuers arrive at the scene of an accident, particularly if the aircraft went down in rugged backcountry terrain or poor weather closed in. Braving the bitter cold, howling wind, and snow for extended periods of time can be difficult, if not impossible in some conditions, without fire and shelter.

Thirty-three pilots, ranging from students to experienced backcountry aviators with thousands of hours, met winter weather head-on in January in northwestern Montana and spent a weekend outdoors learning how to survive in remote areas after an accident. The Surratt Winter Survival Clinic, designed and sponsored by the Montana Department of Transportation Aeronautics Division, taught pilots how to build a survival shelter, light a fire and signal for help, and purify water. It also provided a safe environment for pilots to experience camping outdoors in the winter to get a taste of what it would be like to spend the night in the wilderness after a forced landing. 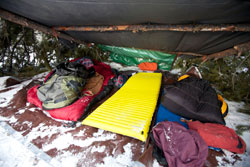 The fire and shelter should be built near the aircraft wreckage, instructors at the clinic explained, because that’s what rescuers are searching for. The shelter should provide insulation from the elements; spreading a tarpaulin, a thermal mat if one was packed as survival gear in the aircraft, or a layer of pine boughs on the ground as the base of the shelter will prevent the cold ground or snow from lowering one’s body temperature. The body already is burning more calories just to stay warm, and if food rations are sparse, those calories will need to be conserved as long as possible.

A manmade survival shelter can be as simple as a tarp draped over a rope (or wiring from the aircraft) tied between two trees or as elaborate as a structure built from chopped trees with four walls of tarps big enough for a group of four. Pine branches and boughs can be cut and leaned against the shelter as an added layer of wind protection. Clinic instructor and retired Army Special Forces Master Sgt. Frank Bowen reminded participants that in a survival situation, building elaborate shelters might not be the best move. The energy spent on erecting the shelter could be used to stay warm and conserve calories. 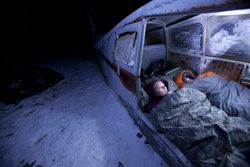 The aircraft also can be used as a shelter. While the fuselage is bigger and more difficult to heat than a survival shelter, it’s possible to survive in it with temperatures falling into the teens. Sometimes, it may be the only option, particularly if the aircraft wasn’t equipped with survival gear or injuries limit mobility. Temperatures during the survival clinic reached the teens at night, but Bowen informed participants that they could actually survive the night by wearing their winter gear, rolling up inside a tarp, and lying on the ground. The fuselage would at least provide shelter from the wind.

Donne Rossow, an 18-year-old student pilot enrolled in Rocky Mountain College’s four-year aeronautical science degree program, grew up in Montana and knows a thing or two about camping in the cold and volunteered to spend the first night of the clinic in an aircraft fuselage. One night in a gutted, iced-over Beechcraft Musketeer during the survival clinic was different than camping, she learned. “I really hope I never have to sleep in one again,” Russow said, later adding, “at least we’re going to know what to expect—a poor, cold night’s sleep.” Russow said that her sleeping arrangement the second night, a simple tarpaulin survival hut, proved much warmer and more comfortable.

Pack as if your life depends on it >>