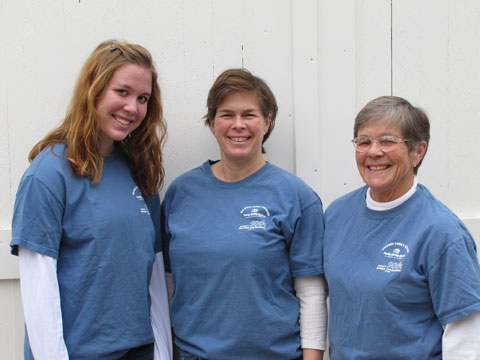 
When the Air Race Classic women’s cross-country race launches from Lake Havasu City, Ariz., in June, one team of pilots will boast three generations, ranging in age from 72 to 16.

The Air Race Classic harks back to the tradition of transcontinental speed competition for women pilots. Race routes are approximately 2,400 statute miles, flown in daylight VFR. Caroline Baldwin competed annually from 2004 to 2009. In 2009 and 2011, she and Lydia raced in a team that included Air Race Classic Secretary Terry Carbonell.

This is the year for the three Baldwins in part because Cara will be old enough to compete. Air Race Classic rules specify that each team must have two pilots, but a team can have a third member who holds at least a student pilot certificate.

The race awards cash prizes for the top 10 finishing teams as well as leg prizes for those who finish outside the top 10. Each airplane is assigned a handicap speed, and the goal is to achieve a groundspeed that exceeds the handicap speed as much as possible. Caroline Baldwin has won leg prizes in previous races, but said that since the three Baldwins will be flying together for the first time, their focus will be on safety.

“It’s about finishing the race and being safe,” she said. “This is a tremendous piece of our family in that one airplane.”

The Baldwins aren’t the first three-generation team to compete in the Air Race Classic. Jean Given, Jeanné Willerth, and Willerth’s daughter, Stephanie, teamed up in 1998. Given came out of retirement at age 75 for the race, her daughter said.

“My mom had stopped flying,” Willerth said. “I was very proud she passed her medical and flight reviews at 75.” Given had flown in numerous air races, including the All Women’s Transcontinental Air Race, which was widely known as the Powder Puff Derby.

Willerth, a CFII who lives in Lee Summit, Mo., recalled that she and her mother hoped to show Stephanie, then 17, that “she could do literally anything.” They raced against former members of the Women’s Airforce Service Pilots and a pilot who was one of the “Mercury 13”--the 13 women who completed the same physical and psychological tests used to select the Mercury 7 astronauts.

Air Race Classic registration concludes April 1. This year’s event is limited to 55 aircraft because of ramp limitations at some of the stops.