Get the app Get the app
Already a member? Please login below for an enhanced experience. Not a member? Join today
News & Media Afghan air force pilots complete first phase of training 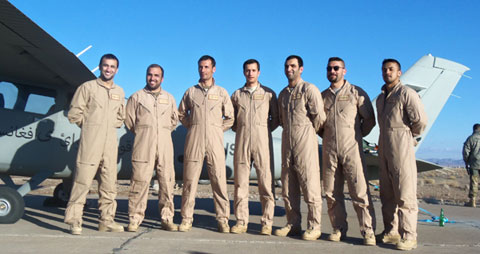 A class of seven newly minted Afghan air force lieutenants have completed the first phase of pilot training at Shindand Air Base, Afghanistan. (Photo courtesy of the U.S. Air Force)

They have mastered takeoffs and landings, lazy eights, chandelles, and engine-out procedures—while carrying more on their shoulders than most student pilots. Seven newly minted air force officers, all natives of Afghanistan, celebrated on Feb. 2 the completion of their first phase of flight training.

This is, according to U.S. Air Force officials, the first undergraduate pilot training held exclusively inside the war-torn country in more than 30 years.

The flight training environment would be familiar, in some respects, to a student from a typical American flight school: early lessons have been mastered in a Cessna 182, a souped-up cousin of the ubiquitous Cessna 172 Skyhawk. The aircraft, now with about 100 hours logged apiece, were flown in 2011 to Shindand Air Base in western Afghanistan. They are “off the shelf” Cessnas, outfitted with a panel built around the Garmin G1000, and coated outside in military gray paint and Afghan air force livery.

U.S. Air Force Lt. Col. James Bands, commander of the 444th Air Expeditionary Advisory Squadron, in an email exchange with AOPA Online, noted the most obvious difference: “The biggest challenge out here is conducting flight training in a combat zone. Shindand typically has a very low threat in comparison to the rest of Afghanistan. This is not to say though that aircraft in and out of Shindand have not been engaged by ground fire (thankfully, the C-182s and 208s have not been).”

The Cessna 208B Grand Caravans that Bands referred to are also “off-the-shelf” 2011 models, deployed to Herat province for both advanced training and transport duty. “We are flying 208s around the country hauling passengers and cargo,” Bands said.

The first class of seven students previously graduated from the National Military Academy of Afghanistan, along with officer training in the United Kingdom. They enrolled in the Kabul English Language Training Center, an immersion course, and will remain on the base for a full year.

Bands said that is among the biggest challenges for the students, who have eagerly soaked up aviation knowledge and aced their early tests.

A squadron of Cessna 182s was delivered in late 2011 to Shindand Air Base in Afghanistan, primary trainers for the first class of Afghan student pilots. (Photo courtesy of the U.S. Air Force)

“The biggest cultural difference is the family aspect. For many, they are the primary provider for their families,” Bands said. “When I went to pilot training 18 years ago, I picked up the few things I owned and traveled with my wife to my new duty station 1,000 miles away. That does not happen here. Shindand does not have housing for families, so the family stays behind. (This) causes stress for the students, as they are here for training for a year with very little chance of getting home during that time.”

The pilot candidates, none of whom has any family member with aviation experience, have embraced the challenge.

"I'm really excited about flying," 2nd Lt. Khan Agha told an Air Force public affairs specialist in December. “It is not something that everyone can do. It's an honor for me to be here to receive this training. The coalition forces have been great in helping us get to this point."

The December ceremony was held three days after the seventieth anniversary of the attack on Pearl Harbor, and the candidates were reminded that air power can be a devastating weapon, and also a powerful humanitarian tool. A local parliament representative urged the pilots-to-be to help their nation grasp an opportunity to become self-reliant.

Bands said the first steps toward earning pilot wings were similar to a civilian private pilot course, a mix of classroom instruction (in tents on the field that candidates helped to build), dual instruction in the Cessna 182s, and simulator training. In the air, the students have practiced slow flight, stalls, lazy eights, chandelles, unusual attitude recovery, and engine-out landings.

“We take the proven methods from military pilot training and incorporate them into the C-182, and build on those when they enter the C-208.” Bands wrote. “As your readers know, the key to the success of the program is repetition, and these students will get quite a bit of that.”

“This type of aircraft was used in Iraq for basic pilot training and because of the success there, it was brought here to Afghanistan for that same use,” said Lt. Col. James Bands. (Photo courtesy of the U.S. Air Force)

The first class will eventually be divided into helicopter and fixed-wing specialists, with four moving on to train in the MD-530 helicopter for eventual service flying newly built MI-17 helicopters purchased from Russia. The other three will prepare to take command of the C-27 Spartan.

Instrument training will begin in simulators, with a total of six available to practice approaches.

“As the security here in Afghanistan becomes more stable, training will shift from a simulator to actual out and backs in order to give the students experience with different airfields and terrain,” Bands said.

In a nation with very few ground-based navaids, nearly all of them associated with major airports, those “out and backs” will be made possible by the G1000, Bands said. “GPS is critical.”

Up to now, they’ve been confined to a practice area west of the airfield, relatively flat terrain bounded by a minor mountain range. Soon to stretch their wings, the class takes take pride in being pioneers, Bands said.

“The last time a pilot training course was given in Afghanistan it was given by the Russians prior to their departure in the early 90s, to answer your last question,” Bands said. “Most of the training received by the Afghan (students) during that era was accomplished in Russia.”