Get the app Get the app
We will be performing maintenance on our systems Sunday, 8/21, beginning at 12:00 A.M. ET and ending at 6:00 A.M. ET. During this time, you may experience intermittent service outages. We appreciate your patience.
News & Media Flying wild in Alaska 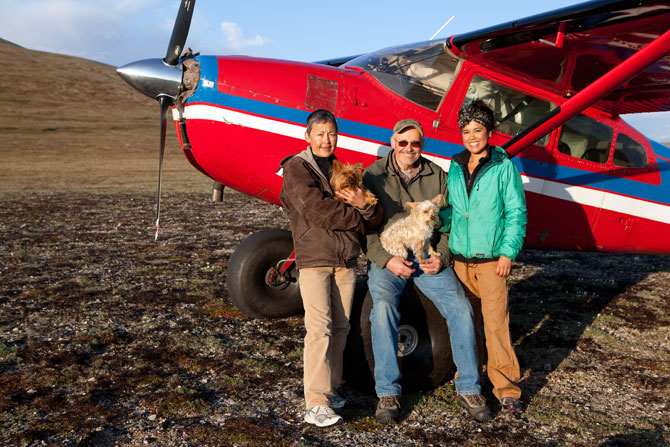 What if there was a television show that showcased general aviation flying? Maybe set in a rugged place where pilots would be challenged by weather, treacherous terrain, lack of amenities, and extreme cold? And perhaps there'd be a lot of drama because of the weather challenges; a cool pilot, who is their revered leader; a happy, hardworking family; and maybe some humor from an offbeat heroine?

Flying Wild Alaska is Discovery Channel’s answer to an aviation prayer: a show that reveals the excitement, drama, and community that exemplifies general aviation. But thanks really have to go to that ditsy heroine—Ariel Tweto—who, in her quest for a TV career, got her hardworking pilot-centric family starring roles in one of Discovery Channel’s most successful new shows. It wraps up its second season in January. 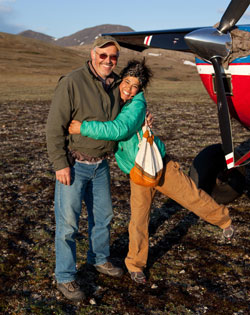 Jim Tweto's relationship with his exuberant daughter, Ariel, and their love of flying are the basis for the popular reality show.

Flying Wild Alaska chronicles the day-to-day life of the Tweto family in the remote Alaskan village of Unalakleet (population 700). Jim Tweto is chief operating officer of Alaska’s largest regional airline—Era Alaska. It’s a commercial operation that employs more than 120 pilots and flies cargo, groceries, pets, supplies, people—and dead people—throughout northern Alaska. Its headquarters is at Ted Stevens International Airport in Anchorage, and Unalakleet is one of the hubs. The company has more than 75 airplanes and handles everything from commuter flights to off-airport bush flying.

The Tweto family—Jim, his wife, Ferno, and daughters Ayla, Elaine, and Ariel—are pilots (Ariel is taking flight instruction during the second season) and all work for the company.

Ariel, a bubbly, happy, star-struck teenager in early 2005, headed to Hollywood with a dream. She was playing volleyball on Venice Beach when the skill and antics of the athletic and beautiful young girl caught the eye of the producer of the reality show Wipeout. Ariel was well known for her athletic prowess in Unalakleet. She was a wrestler (co-ed) and won a district title. She played basketball across the United States and in Europe. She was also a cheerleader and medaled in the Seal Hop, a native Alaskan event. She also wasn’t shy.

So producer Tommy Baynard asked her to compete on Wipeout, an extreme “sports” show that puts contestants on a giant obstacle course with wacky obstacles like huge mud-covered balls and slippery ropes over slimy water. Ariel appeared, ran the obstacle course, but was tripped up at the end when she couldn’t find the pole she was supposed to swing onto (it was right in front of her); she became a fan favorite because of her “where’s the pole?” episode.

“Pretty soon I realized that if I wanted to explore [Alaska], I had to have an airplane.” —Jim Tweto

Ariel and Baynard then put their heads together to create a reality show for Ariel. For two years the pair pitched show ideas with Ariel as the star, until Discovery Channel focused on Ariel’s family background. It was the gritty reality of life and flying in Alaska that attracted the network, says Discovery Channel Vice President of Communications Joshua Weinberg. Ariel grabbed at the opportunity and begged her father to consider doing the program. Even though Jim and Ferno Tweto were hardly the camera-seeking types, they agreed to do the show for their daughter.

“I’m a proud father,” says Jim Tweto. “I’ll do whatever I can for my daughter.”

Jim Tweto grew up in Minnesota playing hockey. He was good enough that the University of Alaska offered him an athletic scholarship. When he got to the forty-ninth state, he fell in love. With Alaska, with his future wife, and with the best way to see the state—GA flying.

“The mystique of Alaska really got me,” says Tweto, who learned to fly in his early 20s. “I kept looking to the west [from Anchorage] and thinking gee, what’s over there? Pretty soon I realized that if I wanted to explore, I had to have an airplane.” 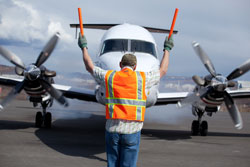 Era Alaska is the real deal, with more than 70 aircraft ranging from the de Havilland Dash-8 to the Beechcraft 1900D and 1900C, a Cessna Caravan, and C-23 Sherpa. It carries from one to 37 passengers and cargo up to 6,000 pounds. The airline serves some 100 communities across the state.

Looking west took him to Unalakleet, where he met Ferno. Her father owned a small airline in Unalakleet. But when Tweto decided he wanted to stay in the village, he started by building fishing boats. He named his company Gussik Ventures—gussik means “white person” in the Eskimo language. Tweto’s boats were adopted by the locals, and in the 1980s he built nearly three-quarters of the fishing boats in the region.

In 1984, with his commercial certificate, Tweto started flying for Ferno’s father and, after the couple married, they started their own company. With just a Cessna 185 the young couple ran the company from their small apartment. In 1990 the Twetos merged with Hageland Aviation and then in 2008 with Era Alaska.

With more than 30,000 hours, Tweto is an accomplished pilot. And, although he can—and does—fly anything in Era’s 70-aircraft fleet, his favorite is his Cessna 180.

“The 180 is a nimble little airplane,” he says. “I fly it 300 to 400 hours surveying for fish and game and really enjoy surveying for salmon at 200 to 300 feet. It’s got big tires and a big engine so I can land pretty much anywhere I want.”

Several years ago Tweto was flying solo and crashed his Super Cub. “It was a bad decision on my part, it was complacency. I miscalculated the ridge. I was the luckiest man that day—the ELT worked and everything happened the way it was supposed to after a crash,” he says. He suffered a compression fracture of his neck but was back at work in a couple of months.

Although Tweto was willing to do what he could for his daughter, he was not willing to compromise the safety and reputation of Era and its pilots. The first season he spent a lot of his time explaining rules and regulations to the nonpilot film crew. 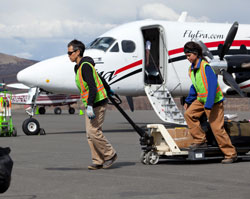 “I really had to emphasize that from the beginning. And we had to review everything. It was a little easier the second season, because they understood more, but it’s nice not having them here. They’re all very nice people, but when they leave I realize how much time they take up,” he says. “I’m no different off camera than on, and all of this is not that exciting to me because I live it every day. After that first week, I never even saw the cameras.”

“We couldn’t do what we’re doing without Jim,” says Co-Executive Producer Grady Candler. “It’s his knowledge of what’s going on that makes this work. Jim loves Alaska and loves what he does. But I know he’d probably prefer not to be on TV.”

In fact, both Ariel and Candler relay stories of her parents traveling outside of Unalakleet and being recognized by people who have seen the show. It makes both of them very uncomfortable.

“It amazes me. People every day are emailing, calling, writing us. Older people share their memories of Alaska. I could spend hours on the phone listening to their stories. People have a fascination with Alaska,” Tweto says.

The camera is on the family and the pilots 24 hours a day during the filming, which lasts about three months. The only time the camera doesn’t record is when one of the cast members uses the restroom. Ariel—who is taking flight instruction in this season’s episodes—says she’d retreat to the restroom for a little cry sometimes when she was frustrated after a challenging lesson. But being the only nonpilot in her family hadn’t bothered her because, with her father, she “always flew.”

“If you want to go anywhere in Alaska you have to fly. I have been so lucky because so many in my village never get to go anywhere because they don’t have the access like I do. And my dad and I would fly and I’d say, Let’s stop down there and see what’s there, and we could,” she says. 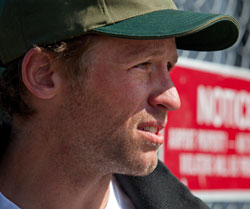 Her instructor has been one of Era’s pilots, John Ponts. “Pilots are such characters,” she says. “Ponts is like my brother.” (That’s for any of you viewers who wondered about a possible romance between Ariel and her instructor.)

The final show of the season, which was to air on January 20, reveals whether Ariel gets her certificate.

In addition to the flying, the pilots, and Ariel, another star of the show is Unalakleet and its inhabitants. Jim Tweto is passionate about the local community and giving residents the opportunity to fly for Era.

“Those who learn to fly are guaranteed the chance to fly for us,” he says. “About 20 percent of our pilots are local. We put the effort into the local guys because this job is hard. Pilots have to be resourceful. They’ll fly 100 miles and make five to six stops to the villages. They’ll have to round up the passengers, deal with weather, and always be thinking ahead.” 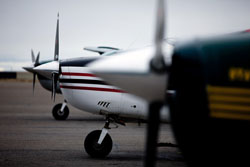 The pilots featured on the show were not prearranged. So much footage is filmed that the stories that emerge from the editing process determine who appears other than the Tweto family.

Overseeing the content of the show, Candler is in the field the entire time the show is filmed. Season one was filmed from the end of August until the first week of December. The dramatic changes in the temperatures—from 60 degrees Fahrenheit to minus 15 degrees—and the effect on life in Unalakleet were key parts of the story line.

“In the fall, Jim did a lot of off-airport work, taking hunters out into the bush in the 180. Then school started and the ‘kiddie hauls’ began. All of the villages are so remote that the kids have to fly to basketball games and wrestling matches. The teachers fly, too,” Candler says. “Then the pilots have to prepare for the cold, dark nights—it’s been light for 24 hours and then they have to regain their night skills.”

The aircraft are equipped with small “lipstick” cameras, but often a cameraman flies along. “Every seat costs money. We don’t want to take money away from the airline,” Candler says. “The shooters are the producers—one person does the job of three people. Jim is our line of communication. We have three teams of five people and we’re spread across northwest Alaska, which is the size of Texas.”

“I think the show is pretty honest,” says Ariel. “There are a lot of misconceptions about Alaska and the show sheds a good light on the problems out here and on the traditions and conditions.”

“They tend to over-dramatize it a little,” says Jim Tweto. But Candler says, “They do it every day—like an ice river landing—and we have to remind them it’s not routine.”

Flying Wild Alaska is a hit with pilots and nonpilots—and its most avid audience is men (it’s Discovery Channel’s number two show for male viewers after Gold Rush).

At presstime, the series had not yet been scheduled for a third season. If it does, it will begin filming in the summer of 2012. Jim Tweto had better rest up.

Email the author at [email protected] . 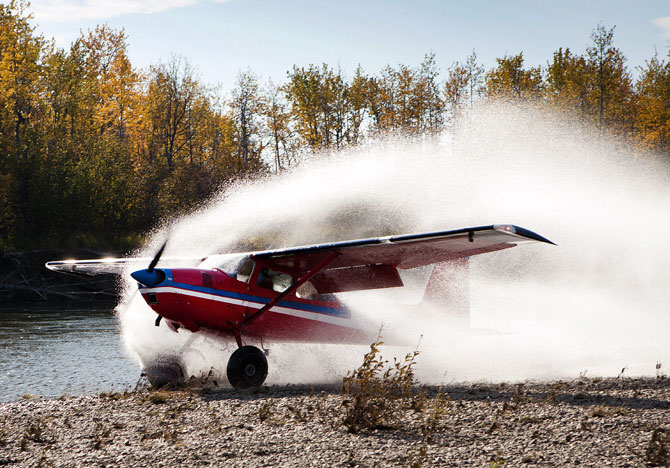