Get the app Get the app
News & Media Wx Watch: Searching for snowmageddons

Ever since the huge 2010 East Coast snowstorm dubbed "Snowmaggedon," those living in the busy northeastern coastal corridor states have been extra curious about any nearby winter lows or fronts. Every time an extended-range outlook pops up, we pay extra attention. The temptation is to look for a storm complex somewhere to the west or northwest, on the assumption that weather complexes traditionally move from west to east. That may be true in a general sense, but the worst of the northeast winter snowstorms are actually born in the south.

Ever since the huge 2010 East Coast snowstorm dubbed “Snowmaggedon,” those living in the busy northeastern coastal corridor states have been extra curious about any nearby winter lows or fronts. Every time an extended-range outlook pops up, we pay extra attention. The temptation is to look for a storm complex somewhere to the west or northwest, on the assumption that weather complexes traditionally move from west to east. That may be true in a general sense, but the worst of the northeast winter snowstorms are actually born in the south.

How can this be? How can a low in the balmy states around the Gulf of Mexico bring icing airmets, head-banging turbulence, widespread IMC, and feet of snow to the entire Mid-Atlantic and New England states just two days after it forms? The answer gives us insight into the way that most organized, major adverse weather systems come about in the eastern United States.

First, you need a big, deep trough plunging southward over the central United States. You can see these sorts of troughs on winds aloft charts for the 500-millibar (about 18,000 feet) level. The trough sends cold air south, where it rams into the warm, moist air that it finds there. This creates pressure gradients aloft, which in turn create jet stream cores at altitude, in turn causing lows and fronts to form at the surface. All this mayhem happens on the southeast corner of the trough—usually around the Gulf states. 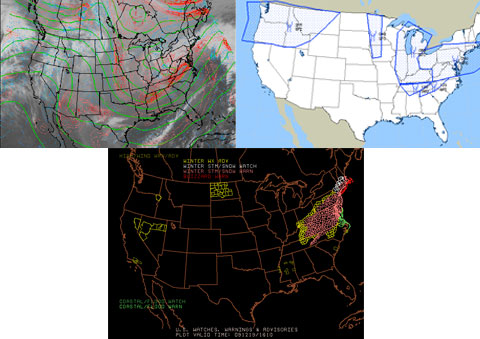 A look at some weather charts for the Northeast snow event of December 19, 2009, include a 500-millibar chart (above left) with clouds and vorticity contours superimposed. Here we can see how counterclockwise motions at the 500-millibar/18,000-foot level helped deepen the low pressure centers at the surface. The highest concentration of vorticity is over Virginia. An airmet presentation for turbulence (above right) suggests a dismal day for flying, with moderate turbulence up to FL200. Meanwhile, the National Weather Service’s watches and warnings chart (bottom) paints a huge area affected by winter weather warnings and advisories.

Once the frontal complex forms, it travels northeastward, riding on winds aloft. It’s only a matter of time before the low’s counterclockwise flow drives that Gulf air northward, creating a massive warm front extending to the east from the center of low pressure. This is the second step——bringing warm, moist air to more northern latitudes, where it runs into subfreezing air. You can visualize it if you think of the cross-section of a warm front. The less-dense warm air rides up and over the colder, denser air nearer the surface. The moisture freezes into snowflakes—a lot of them—as moisture falls into the frontal slope, and snow, freezing rain and, finally, a cold rain falls nearest the surface position of the warm front.

The type of precipitation is a function of the depth of the cold air mass beneath the warm frontal slope aloft. All the precipitation begins as snow, and if it’s subfreezing all the way down to the surface, obviously snow will accumulate on the ground. If the snow falls into a slice of air that’s at or just below freezing, then freezing rain or large-droplet icing is in the offing. If the air is above freezing, then rain occurs. So in the classic eastern snowstorm, snow falls in a zone well ahead of the warm front. Closer to the front, freezing rain is the rule. Finally, very close to the surface frontal position, rain falls. That’s because the invading warm air has done a better job of taking low-level temperatures to the above-freezing mark.

Ever go out after a snowstorm and walk on a crunchy layer of ice that sits atop a layer of snow? Then you’ve seen good evidence of the northward progression of an East Coast winter warm front. First snow, then freezing rain. (I still enjoy walking on that ice layer and having my feet pop through.) 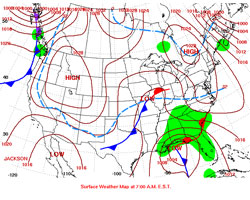 Surface analysis charts for December 18 (top) and December 19, 2009 (below right), show a typical progression of the low-pressure tracks that send the worst winter weather to the mid-Atlantic and northeastern states. Overlay the images from above on these charts and you have a pretty good depiction of the dynamics at work.

The last dynamic happens when the surface low’s isobars tighten, winds pick up, and the snow from the warm front is drawn around the low. This means more—and deeper—snow to the north and northwest of the low’s position. This can affect areas hundreds of miles away from the low.

Wrap-around precipitation is a signature of one of the worst types of East Coast winter storms: the Nor’easter. Nor’easters are especially bad in the winter because they have such a huge moisture supply, courtesy of the Atlantic Ocean.

Does the example just presented represent the only way that snows can keep you grounded this winter? Absolutely not. But the snows generated by systems in the northern tier of states are typically drier because they don’t have the volume of moisture that Gulf systems contain. (However, lows in the interior United States can “center-jump” to existing low pressure centers off the East Coast, causing coastal storms to intensify.)

Plus, like Alberta Clippers, systems travelling through the heartland move faster. Ergo, less snow for a shorter period of time. Lake effect snows can give Gulf-origin storms a run for their money, but they don’t affect nearly as large an area. 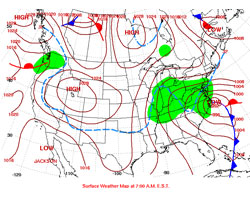 All pilots are weather watchers, right? So this winter, all of us planning flights from Maine to Florida, or from the Boston-Washington, D.C., corridor to Ohio or the mid-South, take note: If you see a surface low forming near the Gulf states, be prepared for the worst in the next couple of days.

Sure, you should check all your usual preflight sources of weather information this winter, but one website gives us what everyone wants to know: Will it be snow, freezing rain, or ice pellets with the next weather system—or will you be lucky and get away with rain? Go online for several computer models’ answers.

What comes up is a looping map of the United States showing color-coded precipitation areas. The type of forecast precipitation is shown, as well as the expected accumulation. The output for all this data comes from two different numerical forecast models—the North American Mesoscale (NAM) and the Global Forecast System (GFS). These models run several times a day, and if you go to the bottom left of the webpage you can select which model and which run time you want. You have your choice of 00, 06, 12, and 18Z. Presumably, the more recent the model run, the more accurate. But as you’ll see, the forecasts go out as far as 180 hours (seven days), and that means accuracy suffers on the longer-range predictions.

Just remember that these are the imaginings of rooms full of Crays, and while they can be uncannily deft at plotting the extent and severity of precipitation, they can and do lie to us in various ways. Even so, it’s useful to compare as many sources of precipitation data as you can should adverse weather threaten your outings this winter. With this website, you can check two models for forecast agreement, loop the images to watch a system’s progress, and compare the whole lot to the depictions shown on any of your other favorite websites. Too bad most of the others won’t go out on a limb to graphically forecast winter precipitation. As always, please check run times and valid times! —TAH