Get the app Get the app
AOPA will be closed July 4th, in observance of the Independence Day holiday. We will reopen at 8:30 am ET on Tuesday, July 5.
News & Media Cirrus focused on Vision jet 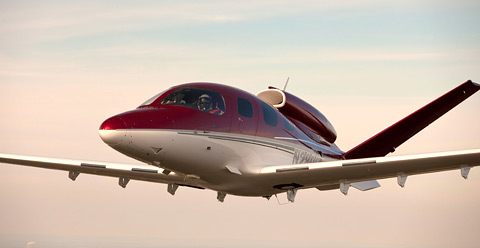 Cirrus Aircraft officials say they are making steady progress on their SF50 Vision jet program and the prototype has logged more than 700 flight test hours since its first flight in 2008.

The company based in Duluth, Minn., has about 500 orders for the aircraft that seats up to seven and is expected to cruise at about 300 knots at up to 28,000 feet. Cirrus anticipates FAA certification in about three years.

Cirrus is starting to build production tooling to manufacture the V-tailed jet, and the company expects to build three conforming airplanes for certification flight tests.

“We're absolutely committed to the program and are convinced it will do well in the market,” said Cirrus CEO Dale Klapmeier at a meeting of the company’s global sales force in Orlando, Fla. “We've been moving forward with it and taking some significant steps.”

Klapmeier said the airplane's flying qualities are extremely close to the company's single-engine, piston SR22, and pilots familiar with the SR22 will be able to make the transition to flying the jet with relative ease.

“In a lot of ways, flying the jet will be easier than flying the SR22 because the jet engine (an FJ33 with 1,900 pounds of thrust) is simple to operate,” he said. “There's one button to start the engine, and one power lever.”

Cirrus was purchased last year by Chinese firm CAIGA and Cirrus officials say the new owners are active managers involved in all aspects of general aviation manufacturing and certification.

CAIGA also owns the rights to several kit aircraft that were designed and produced by Epic, a former Oregon firm that was liquidated in a Chapter 7 bankruptcy in 2009. Epic offered a single-engine turboprop, single-engine jet, and twin jet.

Todd Simmons, Cirrus executive vice president of sales and marketing, said Cirrus has been evaluating those and other designs but has made no specific decisions or plans to put any of them in production, seek FAA certification for them, or build components for other manufacturers.

“We've got an R&D project right now and it's called the SF50," he said. "We're focusing on the Vision jet and will continue to do so.”