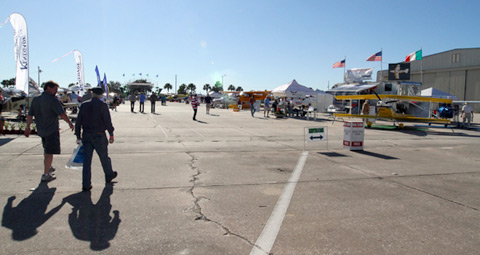 A few hundred people—a much smaller crowd than the numbers expected over the weekend, visited the Sebring U.S. Sport Aviation Expo, which opened Thursday with more than 160 exhibitors and three dozen aircraft on display.

A flying car made for missionaries, lightweight aerobats, and two-seat autogyros turned more than a few heads Jan. 19 as light sport aviators shook off winter blues under clear skies in Sebring, Fla.

The Sebring U.S. Sport Aviation Expo launched its eight annual edition with close to 150 aircraft on display at Sebring Regional Airport, among more than 160 exhibitors showcasing aviation products at the oldest, and still the largest, light sport aviation event of its kind.

Suppliers of aircraft, engines, propellers, avionics, and just about everything else a pilot could want were making a pitch. Attendance figures were not immediately available, but safe to say there were hundreds on the field as the show began. Gerald Brown, owner of a Kolb Firestar KXP experimental single-seater, emerged from the massive tent housing 80 indoor exhibits with a bag full of brochures, along with two hard-to-find specialty tools he needs for wiring work. While LSA manufacturers are eager to find new buyers as the industry emerges with painful slowness from the Great Recession, Brown was not among those ready to plunk down a deposit on something new. Prices on most aircraft models ranged from $100,000 to $160,000 or more. 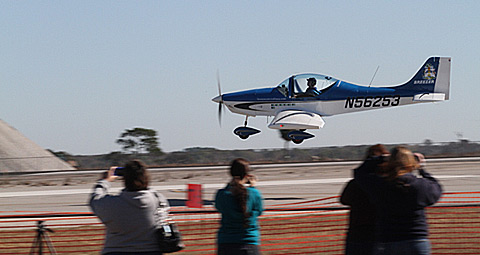 A 2007 Breezer LSA was part of a three-ship formation that overflew the Sebring U.S. Sport Aviation Expo during the opening ceremony on Thursday. The trio of aircraft then landed in sequence in front of a crowd of about 30 onlookers.

“From a price standpoint, I think I’ll stick with what I have,” Brown said. “The biggest decision of the day was, shorts or long pants.”

Light Aircraft Manufacturers Association President Dan Johnson said the industry offers pilots full-featured aircraft with impressive performance at a fraction of the cost of a comparable certified, new four-seat aircraft. About 2,300 fixed-wing light sport aircraft have been delivered since the category was created in 2004, excluding a few hundred more “alternative” aircraft such as powered parachute and weight shift control aircraft. Many can be flown on IFR flight plans and used for IFR training, and the industry is working on developing standards that will clear the way for operation in instrument conditions.

“These airplanes can be used as instrument trainers,” Johnson said.

EAA President Rod Hightower was scheduled to deliver a keynote address on opening day at a LAMA dinner hosted at the expo site, and AOPA President Craig Fuller will host a Pilot Town Hall Jan. 20.

The expo schedule is also packed with daily seminars, aircraft demonstrations, and an aircraft auction—a first for the expo—scheduled for Jan. 21. The expo concludes Jan. 22.

Brown, making his second expo appearance, said he made a point to visit Jan. 19 and get at the deals before visitors arrive in larger numbers.

“This weekend will be a heck of a crowd,” Brown said. 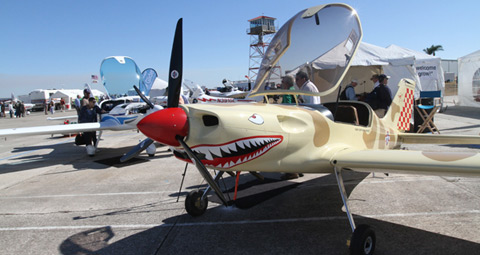 Builders of the Renegade LSA have powered the two-seat aircraft with a Lycoming O-233 featuring the first production electronic ignition system developed for the aviation market. Company officials said magnetos can also be installed if buyers prefer. The company plans to launch this year a cross-country voyage to establish a record time for Los Angeles to New York flight in an LSA.