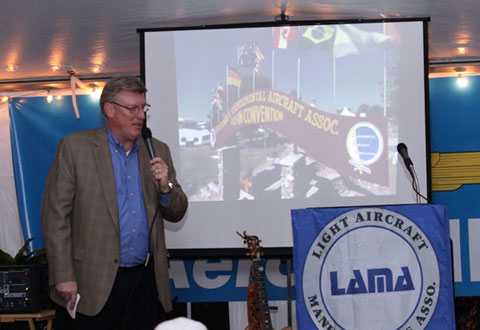 For too many would-be pilots, the path to that first certificate diverts to a dead end.

Eagle Flights, a new initiative outlined for light sport aircraft industry leaders by EAA President Rod Hightower on Jan. 19, is designed to address a critical shortcoming of pilot training: As many as eight in 10 pilots who start training never earn a certificate.

Eagle Flights is essentially an expansion of the long-running Young Eagles program that has given 1.6 million youngsters their first aviation experience.

Instilling a love of flight is less than half the battle.

Hightower cited recent AOPA research that highlighted the importance of “human factors,” including the instructor-student relationship, in determining the success or failure of students. A growing number of first-time students age 35 and up are taking to the skies, and Hightower said this new crop of aviators is posting impressive results: Most earn a certificate within 18 months, and purchase aircraft within two years.

Hightower announced the program to an apparently receptive audience of about 200 LSA manufacturers at a dinner hosted by the Light Aircraft Manufacturers Association on the opening day of the 2012 Sebring U.S. Sport Aviation Expo in Sebring, Fla. The industry, along with the wider GA community, depends on a steady influx of fresh pilots. Hightower said the Eagle Flights program will be launched in conjunction with expansion of EAA chapters, and a newly forged partnership with Boy Scouts of America. EAA has reached an agreement with Boy Scouts of America to expand aviation programs for Explorer Scouts, re-write the Aviation Merit Badge book, and collaborate directly for the first time with scout troops around the country. The agreement marks the first formal, systematic collaboration in the long history of both organizations.

EAA is also working to develop a “Pathways” program that will focus on helping youth program participants earn pilot certificates.

Hightower said close collaboration with AOPA will continue as both organizations seek to expand opportunities for flight training, and successful outcomes.

One key element of Eagle Flights will be finding ways to better match students with CFIs, Hightower said. Matches based on personality and goals are critical. If an older student aiming to fly for fun is paired with a “21-year-old CFI whose mission in life is to get the next right seat in a (regional jet), you’re off to a bad start from moment one,” Hightower said.

The EAA president said AOPA will take the lead on “fixing flight training,” with EAA focused on inspiring more people, young and old, to start their aviation journey.