Get the app Get the app
AOPA will be closed July 4th, in observance of the Independence Day holiday. We will reopen at 8:30 am ET on Tuesday, July 5.
News & Media Odds are good to quash user fees in 2012, Fuller says

Odds are good to quash user fees in 2012, Fuller says 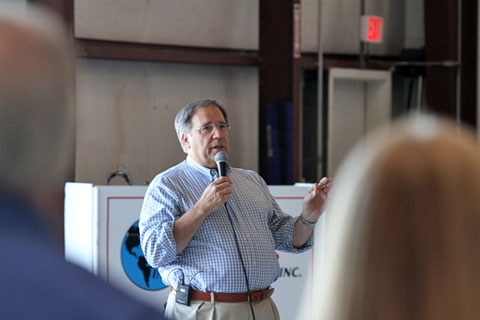 AOPA President Craig Fuller addressed a crowd of about 150 at a Pilot Town Hall held Jan. 20 during the Sebring U.S. Sport Aviation Expo in Sebring, Fla.


The first question AOPA President Craig Fuller fielded from the audience of about 150 attending his pilot town hall Jan. 20 in Sebring, Fla., was about user fees.

What are the chances of stopping the latest push, an attendee wanted to know. The odds are good, Fuller said—this year, at least.

The White House is backing a $100-per-flight user fee for aviators using air traffic services, despite a petition that quickly gathered nearly 9,000 signatures from opponents of the budget-balancing maneuver. AOPA is working, as it has successfully many times before, to mobilize congressional opposition to a burden on GA that could compromise safety by discouraging pilots from utilizing flight following and other air traffic services. 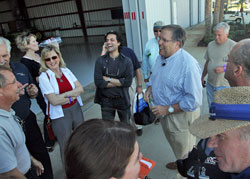 Fuller, speaking during a visit to the Sebring U.S. Sport Aviation Expo, said safety is among the arguments being marshaled against the latest threat to the nation’s freedom to fly. The FAA currently draws about two thirds of its funding from a tax on aviation fuel, a more equitable—and “progressive”—way for aviators to pay their share, Fuller said, noting that aircraft owners and operators pay according to the fuel they burn. While the remaining third of the FAA budget comes from general revenue, Fuller noted that all Americans, aviators or not, benefit from aviation. Air cargo, medical flights, public safety, and agricultural flights are just a few examples.

“The aviation community serves the nation, whether you’re flying on those planes or not,” Fuller said. AOPA is counting on many friends in Congress to block the fees, and Fuller expects to succeed—this year, at least.

“I don’t believe in a national election year, that Congress will go for this,” Fuller said. “My bigger concern is next year.” 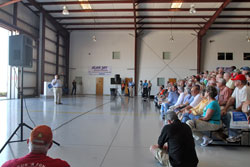 AOPA President Craig Fuller addressed a crowd of about 150 at a Pilot Town Hall held Jan. 20 during the Sebring U.S. Sport Aviation Expo in Sebring, Fla.

Whether President Barack Obama wins re-election, or a new administration begins in the White House, lawmakers will be seeking new revenue sources, and it will take the effort of all 400,000 AOPA members and staff to win the battle to come. Fuller noted that AOPA has members in every congressional district in the country, and lawmakers pay attention to pilots who speak up.

“They know our size,” Fuller said. “Our strength, in all honesty, is in our numbers. It’s with all of you.”

Fuller spoke for about an hour, fielding questions on topics ranging from international flight to the joy of flight itself. Fuller said AOPA will continue to work with industry partners to build aviation communities, protect the freedom to fly, protect airports, and support flight education and pilot retention.