Get the app Get the app
Already a member? Please login below for an enhanced experience. Not a member? Join today
News & Media Tecnam launches 50-state demo, discount program 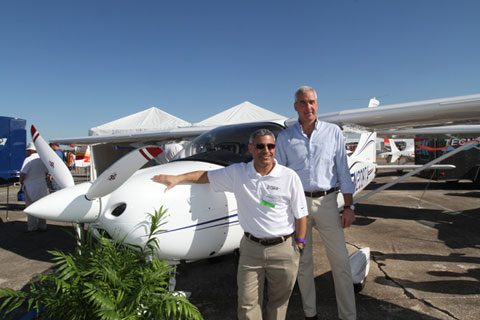 Tecnam North America CEO Phil Solomon on Jan. 19 took the first $500 deposit on a discounted light sport aircraft, with up to 499 more aircraft available at 20 percent off the base price.

The “One Per State” LSA demo program was announced in conjunction with the Sebring U.S. Sport Aviation Expo that continues through Jan. 22. Tecnam was among roughly 160 vendors on hand, and Solomon said the demo program is designed to boost the company’s name recognition and position it to compete with established names like Cessna for a greater share of the market--particularly the flight training market.

Ten different Tecnam models will be offered through the program, ranging from the Echo Classic to the newly introduced amphibians. Discounts range from $21,980 to $29,980, bringing bottom-line prices down to $98,820 for a fully-equipped Echo Classic and $148,020 for an Eaglet G4 Sea Sky amphibian.

“There is no better deal anybody is offering, anywhere,” Solomon said. Up to 500 aircraft will be sold through the program, one example from each of 10 models per state. “This is a huge investment. It’s what needs to happen: bring, basically, some excitement to the LSA market.”

There are a few conditions attached to the deal: Owners must make their aircraft available for limited demonstration within their state, and hold the aircraft for at least two years. Solomon said Tecnam will provide flight instructors and insurance to cover all demo flights; the two-year requirement is also designed to prevent “flipping” the low-cost aircraft. The aircraft must also be purchased with typical equipment packages, including glass panels on higher-end models.

A flight school can operate a fuel-sipping LSA for a third to half the running costs of a Part 23 aircraft--$32 to $37 an hour for an LSA covering fuel, oil, planned maintenance, engine, and propeller reserves by Tecnam’s calculations. Solomon said a Cessna 172 costs $88 to $92 per hour to cover the same basic costs. Solomon recently pitched to a university flight training program a mixed fleet of Tecnam LSA and twin-engine models that could increase multiengine instruction by 10 times for the same price as a current professional flight training program offering 280 hours of total time, including 15 hours of multiengine and 50 hours in a complex aircraft. The Tecnam version would offer students 155 hours of multiengine time for the same total cost, giving students more of the multiengine time airlines want.

Solomon said Tecnam is also aiming to expand its share of the public safety market, offering aircraft that can be used for border patrol and police applications at a fraction of the cost than turbine-powered models. While sport pilots will remain a welcome part of Tecnam’s LSA market, “I’m not counting on the lack of a medical (requirement) to grow this business,” Solomon said.