Get the app Get the app
Already a member? Please login below for an enhanced experience. Not a member? Join today
News & Media Deaf pilot spreads the word: You can fly

Deaf pilot spreads the word: You can fly 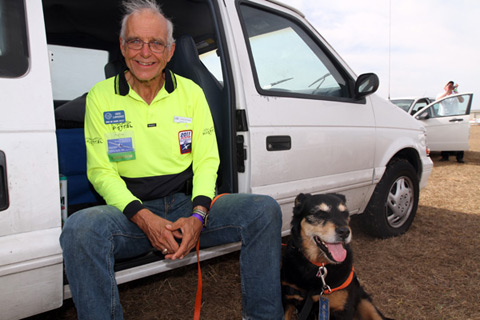 Greg Lawrence’s service dog, Jenny, is also an avid aviator, though he said she’s picky about her airplanes and tends to “mope” if forced to spend time in older models.

Greg Lawrence’s aviation career, logging 3,000 hours over the course of nearly a half century, would be relatively unremarkable by general aviation standards, but for one thing.

Taught to speak by his grandmother, Lawrence retains partial hearing—enough to understand air traffic controllers more often than not. Able to speak clearly, and read lips, Lawrence’s hearing loss was unknown to his teachers until eighth grade. In 1964, with dreams of taking to the skies, he applied for a medical certificate. Not knowing what to disclose when it came to “deficiencies,” Lawrence said, the aviation medical examiner advised him “not to make trouble” for himself, and signed him off. He earned his private pilot certificate in 1966.

“Thirty-five years later, the FAA sent me a SODA [ statement of demonstrated ability],” Lawrence said. “I didn’t ask for it.”

Today, Lawrence remains an avid aviator, transitioning in 2010 from single-engine airplanes (he owned a Cessna 172 for several years, and keeps his certificate current) to gliders and motorgliders. A certificated ground instructor working on his flight instructor glider certificate, Lawrence is also on another mission, visiting schools for the deaf and partially deaf around the country presenting a program with a simple message: “You can fly.”

Airports can potentially be used by deaf and partially deaf pilots the same way they can be used by aircraft without radios. “Do the math,” Lawrence said.

It’s a message that often gets through for the first time to students in schools for the deaf, and one that Lawrence hopes to gain sponsors—and an aircraft—to help spread.

He spends many of his nights in front of a computer, using video links to supplement the flight instruction of deaf people around the country. Lawrence also has developed lesson plans, adapting American Sign Language for use in a cockpit. A lengthy preflight conference allows students and instructors to work out visual cues that facilitate communication.

“What applies to deaf and hard-of-hearing people applies to everyone using English as a second language,” Lawrence said. Visual communication enhances safety for both types of student, particularly in pressure situations where command of language poses the greatest challenge.

With his trained assistance dog Jenny, a rescued mix-breed who has developed an affinity for flight—though she’s picky about airplanes, moping a bit when piled into an older model—Lawrence hopes recent talks with a Purdue University official may open the door to putting him on the road full time. He wants to extend his travels to every school for the deaf and partially deaf in the country, and offer them a living example of what’s possible.

He has already seen the idea take flight, the light bulb lighting in the smiling faces of youngsters.

“Well, if that old deaf guy can fly, I can fly,” Lawrence said. For an aviation community working to build its numbers, the same message has the power to reach those who aren’t hard of hearing, too. “For every deaf person I reach, there’s a thousand hearing people.”