Get the app Get the app
Already a member? Please login below for an enhanced experience. Not a member? Join today
News & Media Conference focuses on space station science 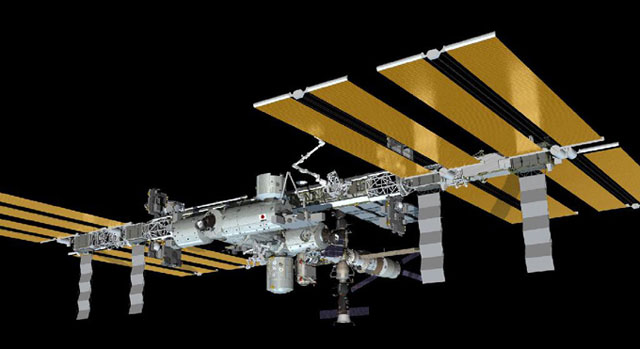 This computer-generated rendering from NASA depicts the International Space Station as currently configured.

From basic scientific research to building a better golf club, the International Space Station is poised to produce. A first-of-its-kind conference organized by the American Astronautical Society held June 26 through 28 in Denver gave researchers the broadest look to date at what has been accomplished already, and what discoveries lie in store in the coming decade.

It was also, according to AAS Executive Director James Kirkpatrick, a kind of coming out party for the Center for the Advancement of Science In Space, a nonprofit organization created to manage the science experiments being run 200 miles above Earth.

“This conference was kind of their introduction to the space community,” Kirkpatrick said. About 400 representatives of university programs, major corporations, NASA, and other stakeholders engaged in highly technical discussions of what has been accomplished in space, and what is possible.

Working in microgravity (the Earth does retain some “pull” on the space station, though it is a nearly weightless environment) has facilitated important advances in materials science, pharmaceuticals, fluid dynamics, and human physiology. An international commitment to keep the station in orbit for another eight years at least promises to return much for the billions invested, said Kirkpatrick, whose 54-year-old organization represents major corporations and government agencies involved in space exploration and research.

Kirkpatrick said CASIS was created to “cut the red tape” and help speed the path of worthy ideas and experiments to orbit. CASIS will manage the selection process, and provide both public and private grant funding for selected research projects.

NASA will continue to be involved, but hopes to shift focus—and public investment—toward missions beyond low Earth orbit in years to come, Kirkpatrick said.

“NASA wants to get out of the actual business part of it,” Kirkpatrick said. “NASA will always be in the background to make sure it’s all safe.”

Vaccine development, creation of stronger and lighter materials, and new understanding of the effects of spaceflight on human physiology were covered in detail, and Kirkpatrick said raising public awareness of the many benefits that have come from space research remains an ongoing mission for all involved. While much of the work is “pure science,” a golf club manufacturer recently signed on for an experimental slot, Kirkpatrick said.

While billions have been spent to date, “most people if you research it would feel that we’ve really got our money’s worth,” Kirkpatrick said.