Get the app Get the app
Already a member? Please login below for an enhanced experience. Not a member? Join today
News & Media Topsy-turvy course hooks lifetime flyers, customers 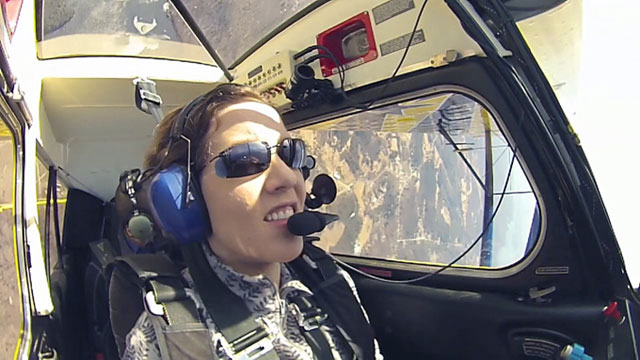 A student of Executive Flyers goes vertical in a Super Decathlon.

This is how it starts.

The landscape of northeastern Massachusetts spun in the windscreen as I threw the stick left and put the Super Decathlon 8KCAB into a ballistic roll. Past U.S. National Aerobatic Champion and 2008 Budapest Red Bull Air Race winner Michael Goulian guided me through the maneuver from the back seat as we headed back to the Goulian family’s flight school, Executive Flyers, at Hanscom Field in Bedford. We were completing the first flight in the school’s unusual attitude course, a gateway to the world of aerobatics, and I understood how people get hooked—how timid new pilots climb into the Decathlon for three to five hours of unusual attitude training and leave with a taste for flying upside down.

The Super Decathlon can pull 6 positive and 5 negative Gs, but to the decorated aerobatic performer, used to the 420-degree-per second roll rate and 10-G limit of the Extra 330SC, “It’s a truck.” The 180-horsepower aircraft is docile enough to feel familiar to pilots who trained in the school’s Cessna 172s, however, and responsive enough to expand their comfort zone in a program that starts with falling-leaf stalls and works up to simulated wake-turbulence upsets and spin training.

Goulian said the program is designed for newly minted private pilots, to allow them to expand their personal limits comfortably. He recommends taking the course before launching into another intensive program of study like the instrument rating: It helps pilots not be afraid of the airplane, and it’s just plain fun.

“It seems like we’re almost afraid to tell people that flying is fun,” Goulian said, citing manufacturers’ ads that emphasize an airplane’s utility for business. It should be challenging and fun at the same time, he said, a philosophy that drives the school his late father founded in 1964 and that continues as a family enterprise.

I met Goulian, Executive Flyers’ chief pilot, at the school’s facility down a hallway in the Hanscom terminal—a low-key location to find a pilot who has earned airshow performing’s top three honors, but a natural one. The Massachusetts native said his experience growing up around the business and working there—from washing airplanes to instructing—proved a valuable education in business and flying.

He said his father brought him to the hangar one day when he was a teenager and said, “Guys, this is Michael. Michael, this is guys. Give him a broom.” He learned how to change tires and spark plugs, gaining a better understanding of how the airplanes worked, and got to see the operation from a customer’s perspective as he worked on the line. “I’ve fueled thousands of airplanes, and washed a thousand more,” he said. Now the performer spends most of his flying time with his airshow business, but still instructs CFIs at Executive Flyers.

The school’s focus on the customer was evident as we walked out to the airplane, which was washed and fueled and ready to go. The lineman even ran back to the office to fetch a cushion when moving the seat forward wasn’t enough to accommodate my five-foot frame.

‘So they can see the world roll around’

The first lesson in the unusual attitude course starts with the familiar stalls from primary training and takes them to another level to help cement the critical aerodynamic principles in pilots’ minds. Stalls are about angle of attack, not airspeed: Every private pilot could probably tell you that, but many don’t really know what it means, Goulian explained.

We left Hanscom and headed northeast, passing Lawrence Municipal Airport, the location of Executive Flyers’ maintenance facility and Goulian’s other business, Goulian Aerosports. It would be an abbreviated lesson: Some of the maneuvers, such as extreme attitudes simulating runaway trim, would have to wait for a clearer day.

Finding a hole in the 2,700-foot ceiling, we began a series designed to cure such nasty habits as counting on the engine to pull you out of a stall. With the throttle all the way back, I pointed the nose skyward, waiting for the buffet. Then, without pushing the throttle forward, I dropped the nose to break the stall.

Instinctively anxious about the quiet engine, I pushed the stick forward aggressively. It was more than I needed, and the nose pitched down abruptly. I repeated the maneuver: Pull back, drop the nose. Pull back, drop the nose. As I became more comfortable with the idle engine, the airplane moved more gracefully. We moved on to falling-leaf stalls and three-point landings before heading back toward Hanscom. On the way back, we turned the airplane upside down in three ballistic rolls, a teaser of training yet to come. The first lesson always ends this way, Goulian said, “just so they can see the world roll around.”

Students spend more time upside down in the second lesson, when instructors roll the airplane to simulate wake turbulence. In the third lesson they practice simple entry and exit from spins; and throughout the course they practice landings in the conventional-gear airplane. Goulian estimates that around 70 percent of pilots who go through the unusual attitude training move on to another program such as tailwheel or aerobatic training.

Goulian said corporate and airline pilots have benefitted from the course, but low-time pilots like me have the most to gain. Hopping in the Decathlon gives them a chance to focus on stick-and-rudder skills without the pressure of the practical test standards, and allows them to gain confidence by getting a feel for the airplane. Many pilots “don’t understand that a normally operating engine plus a windshield is all you need to fly an airplane,” Goulian said. “All the technology in the world doesn’t help aviating skills.” He said that when the flying comes more naturally, pilots seem more attuned to the world around them, with better situational awareness.

The Decathlon, the same type of airplane in which Goulian started his aerobatic training years ago, helps open the world to pilots because it’s a “real airplane,” he said. It’s not as nimble as the sporty Extra 300L on the line, but it’s capable and familiar. Among the school’s fleet of about 20 airplanes, the Decathlon stands out, he said. “It’s the busiest airplane in our fleet,” he said; it’s made a lot of lifetime customers.