Get the app Get the app
Already a member? Please login below for an enhanced experience. Not a member? Join today
News & Media Italian ambassador takes to American skies 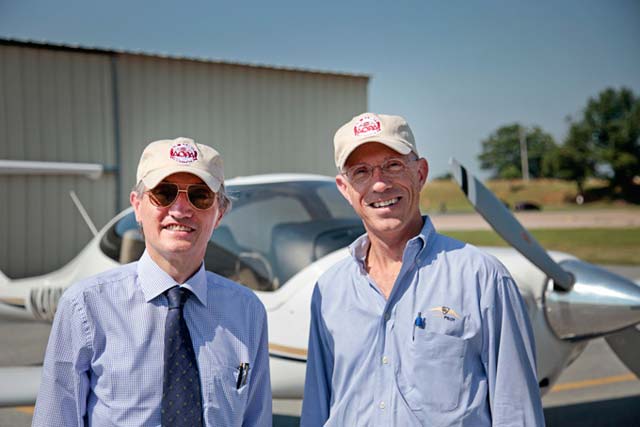 AOPA recently welcomed a diplomatic visit to association headquarters in Frederick, Md., celebrating a move by Italy’s government to reverse a luxury tax imposed on aircraft making short visits. The cash-strapped government had imposed a variety of new taxes, including one that hit aircraft after just 48 hours in country. Extending that timeframe back to 45 days made sense for aviation, and for a country eager to attract visitors, the government agreed, reversing the tax policy in May. The legislation was enacted with strong support from AOPA Italy, which made a case that the cost of lost air travel would outweigh any benefit from the tax.

Ambassador Claudio Bisogniero is not only Italy’s senior diplomat stationed in America, he is also a pilot – typically taking the left seat in a Cessna 172. AOPA Foundation President Bruce Landsberg was happy to take to the skies with the ambassador in a Diamond DA40, introducing Bisogniero to a G1000 glass cockpit and autopilot with a little instruction on a flight from Frederick Municipal to Eastern West Virginia Regional/Shepherd Field on a sweltering day. The pair logged 1.1 hours, with several touch and goes. Landsberg introduced the glass cockpit with a little instruction, but “he didn’t need much,” and the flight was smooth, if on the warm side.

“The ambassador is a great fan of GA and we hope that the relationship will grow as AOPA Global works with other AOPA’s around the world,” Landsberg said.

AOPA headquarters is also home to the International Council of Aircraft Owner and Pilot Associations, with an ongoing mission to build the community of pilots and support GA around the world.