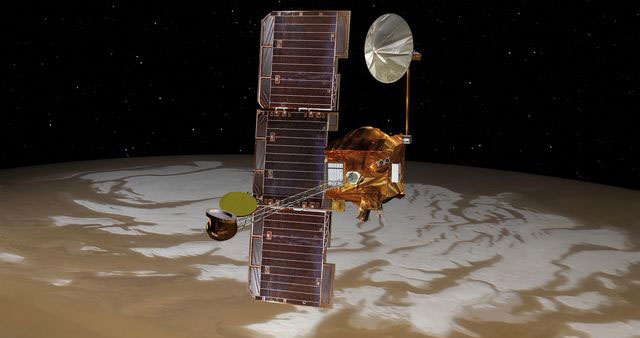 NASA’s Mars Odyssey Orbiter, launched in 2001, may not be in position to relay a message from Curiosity immediately after the planned Aug. 5/6 landing, after all.

Imagine shooting the instrument approach of your life, hurtling through the Martian atmosphere on a treacherous descent, decelerating from more than 13,000 mph to zero in about eight minutes. Imagine everything goes as planned—the parachutes deploy, the rockets fire, the landing is smooth—and a call back to millions waiting eagerly on Earth is essentially put on hold. 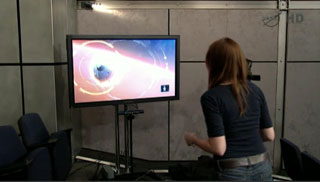 NASA and the Jet Propulsion Laboratory have teamed with Microsoft to produce an Xbox console game simulating the landing of Curiosity, demonstrated here by Danielle Roosa, granddaughter of Apollo 14 astronaut Stuart Allen Roosa.

This could happen, NASA officials said, because of a recent glitch in a much older spacecraft— Odyssey, launched in 2001 and orbiting Mars ever since, was knocked out of position by a malfunctioning inertia wheel that triggered an automatic entry into “safe mode” and repositioned the satellite for further instructions from Earth.

That new orbit may or may not be corrected in time for the Aug. 5 (Pacific, Mountain and Central time zones)/Aug. 6 (Eastern Time) landing of Curiosity, officials said July 16.

“There’s no impact to landing itself,” said Doug McCuistion, director of the Mars Exploration Program at NASA. “It’s simply how the data gets returned to us, and how timely that data is.”

Controllers, engineers, and scientists eager to put the car-sized Curiosity to work searching for signs of ancient life may get the first word through other Martian satellites, or wait another hour and a half before Odyssey flies over the chosen landing site, inside the Gale Crater at the base of Mount Sharp. 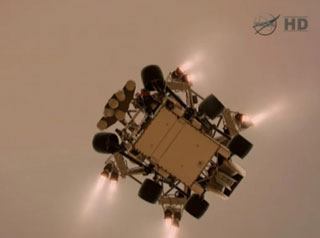 A simulated view from below as Curiosity is about to land on Mars.

While brimming with enthusiasm for what Curiosity is expected to find, McCuistion and other officials stressed the risk involved in attempting to land. A complex sequence of systems will activate according to a program, shedding spaceflight modules, deploying parachutes, shedding the heat shield, and finally, firing rockets to slow the rover’s descent to a safe speed. Radio signals traveling at the speed of light still need 13.8 minutes to cross the 154 million miles that will separate Earth and Mars on landing day. There’s no room for human intervention: The rover will live or die alone.

NASA has partnered with the Jet Propulsion Laboratory and Microsoft to create a game for the Xbox console that gives humans a taste of what it would take to hand-fly Curiosity through entry and landing—the most difficult and dangerous part of what is hoped to be a mission measured in years. Danielle Roosa, granddaughter of Apollo 14 astronaut Stuart Allen Roosa, demonstrated the free game during the July 16 press conference.

“This is a tricky balancing act, and we didn’t give her a lot of fuel,” said JPL’s Jeff Norris as Roosa guided her virtual vehicle to a perfect landing, celebrated by a hearty whoop and jumps by the virtual pilot. It was likely to prove low-key compared to the celebration that will ensue when, and if, word of a successful landing eventually arrives.

The game, available free of charge, is part of a barrage of applications and social media efforts NASA has deployed to encourage active interest among space enthusiasts young and old. 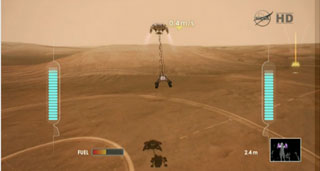 NASA and the Jet Propulsion Laboratory have teamed with Microsoft to produce an Xbox console game simulating the landing of Curiosity.

After landing, the journey of discovery will be a long one. Curiosity will probe the Martian landscape for signs of organic compounds, signs that life may once have taken hold on the planet. If such evidence is found, and survives rigorous scientific debate, it could answer one of the most fundamental questions mankind has ever posed: Are we alone in the universe?

“That’s a pretty big question, and it’s hard to predict how anybody will react,” said Michael Meyer, Mars Exploration Program lead scientist. If life is proved to have existed, or still exist, on another planet, “my conclusion would be that life is easy, it’s a natural process, and the universe is just littered with life.”