Get the app Get the app
AOPA will be closed July 4th, in observance of the Independence Day holiday. We will reopen at 8:30 am ET on Tuesday, July 5.
News & Media FAA updating flight inspection fleet for a NextGen world

This Beechcraft Super King Air 300 is a kerosene-burning bloodhound, packed with antennae that sniff voraciously for signals far too weak for typical avionics to ever detect. For more than two decades it has flown from Will Rogers World Airport, running carefully planned tracks around the country, scrupulously scooping and recording the broadcasts of every navaid in sight. Flight crews, composed in large part of military veterans, are tasked with verifying each new instrument procedure is safely clear of obstacles, is flyable; that the obstacles are marked accurately, that lights and localizers alike are functioning within design limits. They are the last link in a long chain of collaborators who create and deploy the procedures and systems that make instrument flight possible, safeguarding millions of passengers and pilots. 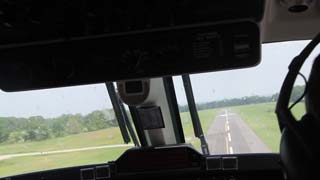 And NextGen—the national transition to satellite (performance-based) navigation that promises point-to-point travel and highly accurate (if not technically “precision”) approaches, some with a 200-foot minimum—is transforming the job. The FAA this year celebrated publication of more than 3,000 instrument approaches built on Wide Area Augmentation System satellite signals. More are on the way, including soon-to-be-published update of the GPS approach for Runway 35 in Antlers, Okla., that will sport a 904-foot minimum—334 feet above the threshold, and a reduction of 236 feet from the current chart.

Before that could happen, pilot in command James Krenek, copilot Donald Harper, and Tom Clements, who monitors and records every detail in the back, had a job to do. 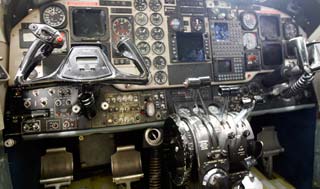 After two decades of service, the FAA has begun to overhaul the 18 King Air 300s used for flight inspections. The agency also operates a dozen newer jets for the mission, a mix of Learjets and Challengers.

Signals from space are monitored continuously by others in the agency, along with the U.S. Air Force (which also produces many of the flight inspection pilots and conducts joint operations with FAA crews in foreign lands). But the bloodhounds of Flight Inspection Services must still verify latitudes, longitudes, elevations, and a host of new, less familiar terms—they test more than 100 parameters in all. Using the Ground Based Augmentation System (airport-based systems, some of which are privately operated), a King Air, Challenger, or Learjet can track its position down to a tenth of a centimeter—far exceeding the system’s demonstrated accuracy of less than a meter horizontal or vertical.

“You get into a whole new language with GPS,” said Clements, who began his flight inspection career seated backward in a Saberliner collecting spools of thermo graphic paper then used to record signals from comparatively primitive receivers.

“Just the storage alone is kind of painful,” Clements said. “All these things have to be maintained in some kind of record archive.”

Today, that job is done on a powerful Windows-based computer, with tiny memory sticks able to hold a year’s worth of data.

Flight Check 79 approaches Antlers after a quick jaunt toward Texas to give a vortac a good, hard sniff, signed off from ATC and squawking 1200. Facing forward in a comfortable seat, beefed-up air conditioning keeping things cool (mostly for the benefit of cabinets packed with electronics that dominate half the cabin), Clements and Krenek converse in short, relaxed sentence fragments, coordinating arrivals, routes, and marking certain spots. At the controls, Harper is meticulous about airspeeds and altitudes, occasionally banking 30 degrees to one side or the other to let Krenek get a good look at passing towers marked on a procedure that for now is labeled “PROTOTYPE: NOT FOR NAVIGATION.”

Satisfied that the diagram is accurate, Krenek broadcasts another position report and intentions three miles out, Harper descending toward a low pass over the runway. There is no sign of traffic in the air or stirring on the ground on this day. At larger airports, particularly those with Class B airspace, such visits are made in the wee hours to limit disruption. Here, with half a dozen single-engine aircraft tucked in hangars on a weekday afternoon, there is nothing to disrupt.

Clements, perched on the precipice of retirement, insists it has never gotten old, patrolling airways and recording airwaves, day in and day out, crisscrossing the countryside on missions that typically last three or four days. Crews make it home to bases around the country on weekends, he noted, and in the details of the work there is variety. Some routes are dense with runways and navaids, forcing a fast pace of action and impeccable organization. Some are in far-flung lands. Clements has more than once checked and verified signals that guide pilots to the ice runways of McMurdo Station on Antarctica.

“We go down in October for a couple of weeks,” said Clements, who was deployed there by the U.S. Navy in 1978 for Operation Deep Freeze, and returned in 2007 and 2008 working for the FAA.

“Antarctica is a very mystical place, it has quite a magnetic draw to you,” Clements said. “You’re a small handful, a group of people (who’ve) ever been there.”

‘Anywhere in the country’ 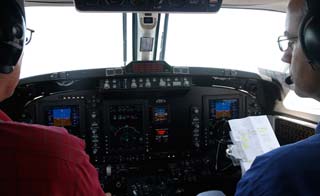 Rockwell Collins Pro Line 21 avionics are being added to FAA Flight Inspection King Air fleet, along with a host of updated electronics for the specialist in the rear who monitors and records data from each passing navaid and instrument procedure.

As if to highlight the point that there’s always something a little different in what might seem to an outsider like a sea of sameness, an urgent voice breaks the near-silence of final approach in the cockpit. Harper ignores the terrain warning—the approaching runway is plainly visible, with scattered clouds far above. Nothing interrupts smooth changes in pitch and airspeed as the King Air completes its approach with a low pass, about 50 feet over the terrain (runway), according to the annoying voice from the panel. Krenek accurately deduces that the newly installed Rockwell Collins Pro Line 21 excludes from its database runways shorter than 3,500 feet. A 3,298-foot ribbon of pavement flashes beneath extended wheels, Krenek and Harper having each calmly acknowledged and dismissed the warning:

“Terrain, pull up! Terrain …” is stopped with the push of a button.

Clements has meanwhile noted (and his computer recorded) the exact height of threshold crossing, the point in space where the signals will point all other aircraft that follow.

For Clements, and others in this operation, precision and capability are points of pride. The false alarm from the cockpit proves the only deviation from the expected in this short flight. Computer software helps dispatchers design and assign the most efficient routes possible, maximizing a return on taxpayer investment to which all of the staff is sensitive. Mechanics in the shop talk about it, flight crews and managers talk about it: during a two-day visit, most conversations include a nod to what’s been done to trim costs, from careful routing to the re-use (with a fresh coat of paint) of the yokes and other serviceable parts of each King Air being updated in turn.

Flight Inspection Services Manager Douglas Vaz said the staff of 530 people operates 32 aircraft—12 jets and 20 turboprops—on a $60 million annual operating budget, averaging an additional $9 million annually on acquisitions and upgrades. With that, they cover military runways worldwide, and all U.S. navaids and procedures. A check aircraft is assigned to visit all new additions to the National Airspace System, and thereafter revisit non-precision navaids every 540 days; precision (ILS) installations every 270 days—or as needed, when lightning strikes and similar events knock a system out of tolerance. Efficiency is in such cases balanced against the need for expediency, Vaz said. “Our goal is a 48-hour response time, anywhere in the country.”