Get the app Get the app
Already a member? Please login below for an enhanced experience. Not a member? Join today
News & Media Resuming the Journey: Flying the Champ in Alaska

Resuming the Journey: Flying the Champ in Alaska

I am in the mountains north of the Arctic Circle, as part of an aviation-themed youth camp, named Brooks Range Bible Camp, staffed by Kingdom Air Corps volunteers, and held each year in July for two weeks. Week one is for children ages 8 to 12, and week two is for teenagers. The teens get flight instruction as part of their camp curriculum—many will bring their logbooks from last year! Pilots with Kingdom Air Corps flew in to the villages of Allakaketand Anaktuvuk Pass recently to pick up 27 kids and their gear. For many of them—though no strangers to aviation as their sustenance depends on it—it was the first time they’d ever flown right seat. Climbing out of the airplane, I caught some of their grins, which were as big as the bears often seen around here. One eight-year-old co-pilot, Rhea, smiled and shared her favorite part of piloting: “I really liked talking on the headsets!”

About 9 p.m., after a busy first day of camp, including a bonfire on the shores of Crevice Creek, Dwayne King, founder of Kingdom Air Corps and I left the lodge, and headed for the private grass strip. The sky was still bright—it looked like 4 p.m. on a summer’s day in the Lower 48. The blue sky still held picturesque clouds drifting across the mountains, and a light breeze was just enough to keep the mosquitoes at bay. N2745E is a 1946 7AC Aeronca Champ, modified with 90 horsepower pulling its fabric-covered steel tube frame. It’s an Alaska bush airplane that works for a living. King is a bush pilot, with more than 15,000 hours in his logbook, who knows this Champ well — he’s one of the mechanics who keeps it flying. 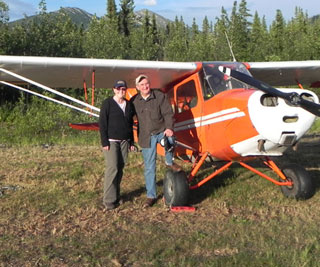 A Champ is to a Skyhawk like a camel is to a horse. You can ride them both and each will provide reliable transportation, but the camel is a strange animal. The Champ is a conventional airplane, with two tundra tires up front and a smaller tailwheel in the back. The tailwheel on this Champ is beefy, being modified with a Scott 3200 tailwheel tire. I climbed in the seat in front to find the Champ has heel brakes, set off at an angle from the rudder pedals, so your braking foot position resembles Charlie Chaplain’s feet in his distinctive penguin walk. The panel is bare bones basic and none of the instruments are positioned where I’m used to seeing them in AOPA’s Skyhawk. The airspeed indicator is the far right gauge; the altimeter is on the left side. The most important instrument on the panel is dead center—the needle and ball. The game is to keep the ball centered in its little cage. My familiar yoke is missing, but a stick does a fine job of moving the airplane in all directions. The throttle is on the left side where the Cessna 172 door is, and is controlled by a knob that slides back and forth. Trim? It’s on the ceiling over the pilot’s left shoulder. There are two gas gauges: one is a rolling gauge just under the compass, and the other a wire cork bobber sticking up on the hood of the aircraft, which, if it stops bobbing, means you are out of gas.

After the aircraft familiarization, King taught me the start-up procedures, starting with “never.” Never hand prop the aircraft unless it’s tied down and chocked, or a competent pilot is at the controls and on the brakes. Champs have a mind of their own when left unguarded. The start-up goes like this: Heels firmly on the brakes, mags on both, mixture rich, carb heat off. Then, King hollers to me, “Brakes, throttle, contact.” I quickly slide the throttle forward and back twice, then holler back, “Brakes, throttle, contact.” He proceeds to throw the propeller and it usually catches on the third try. We started her up to be sure I understood the procedure, and were tempted to fly on such a spectacular evening, but it was after 10, and about 50 campers and staff were trying to sleep nearby. We decided to meet at the Champ at 7 a.m. the following day. 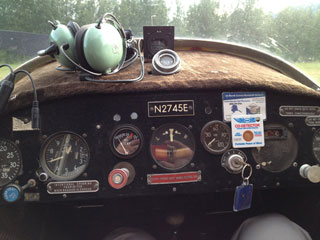 The next morning continued to be fair, though a little damper. Mosquitoes were hungry, so King had me jump in and shut the door on them—a procedure referred to as the Alaskan sterile cockpit. We fired it up and taxied to the center of the grass strip in short order. King coached me through some very wobbly taxiing, I added full power, more right rudder, and let it lift off at 50 mph. We climbed between the peaks of the sun-streaked Brooks Range at 65 mph, leveling at 2,200 feet and 85 mph to do some coordinated turns. King slipped and skidded in the back (I could hear him groaning) as I got the feel of the airplane. I did better when I didn’t look at the ball so much, but manipulated the flight controls so it felt right—making real the term “seat of the pants” flying. After the third or fourth set of turns, we descended and headed back to the strip. The wind sock hung limp, so we turned crosswind and flew a tight pattern to the grass runway. Did I mention there are no flaps? It makes landing procedures pretty simple—but simple does not mean easy. We brought the power back gently and the nose up slowly, gradually pulling the stick back, steering mostly with rudder. It was a kind of dance to set it down. To be honest, King helped a good bit from the back seat, but we both know my time will eventually come.