Avidyne Corp. provided additional information about its IFD440 FMS/GPS/NAV/COM at EAA AirVenture on July 23. Designed as a plug-and-play replacement for Garmin GNS430-series navigators, Avidyne said the IFD440 can reduce installation cost and downtime for customers who want to add a touch-screen display or who are upgrading avionics to obtain Satellite-Based Augmentation Systems/Localizer Performance Vertical Guidance (SBAS/LPV) and Automatic Dependent Surveillance-Broadcast (ADS-B) capabilities. The unit was first announced July 5. 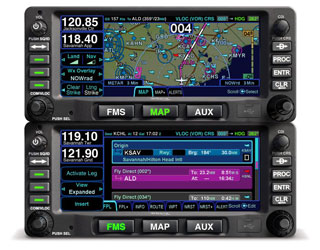 The company had previously announced a full stack of plug-and-play panel-mounted avionics, including the IFD540 FMS/GPS/NAV/COM with a larger screen, as well as an audio panel, a Mode S ADS-B transponder, and an enhanced digital autopilot. The IFD440 and IFD540 are based on Avidyne’s Entegra Release 9 flight management system.

“We weren’t actually sure if we could fit [the electronics] into the smaller package,” Avidyne President Dan Schwinn said. The IFD440 features the same user interface as the IFD540 on a hybrid screen, offering the option of touch-screen inputs or traditional knobs and buttons—the IFD440’s smaller screen is the biggest difference.

“There’s a tremendous amount of communication between multiple units installed in the same plane,” Schwinn said, adding that the plug-and-play replacement makes a significant reduction in the cost, time, and risk of an upgrade. “You can literally pull out a 430 and slide this in.”

Schwinn said the company hopes to complete work on the IFD540 this year, with certification in early 2013 and first deliveries in mid-2013. The shorter IFD440 will follow that unit to market.

Avidyne has been working with Aspen Avionics to integrate Avidyne’s DFC90 digital autopilot with Aspen’s glass panels, and Schwinn said he had hoped to announce supplemental type certificate approval at AirVenture—but the certification work was not quite complete.

He also said that Avidyne has seen an improvement in business levels since 2010 and 2011. “I wouldn’t call it a significant uptick in business but things certainly have improved,” he said. International sales and Avidyne’s traffic sensors have contributed to the increase, Schwinn said.

Technical Editor
Mike Collins, AOPA technical editor and director of business development, died at age 59 on February 25, 2021. He was an integral part of the AOPA Media team for nearly 30 years, and held many key editorial roles at AOPA Pilot, Flight Training, and AOPA Online. He was a gifted writer, editor, photographer, audio storyteller, and videographer, and was an instrument-rated pilot and drone pilot.
Go to Mike Collins's Profile
Topics: Avionics, NextGen, Advocacy