Get the app Get the app
Already a member? Please login below for an enhanced experience. Not a member? Join today
News & Media Flight of 75 Cubs marks 75th

Piper Cub pilots and their passengers in Hartford, Wis., were up before dawn July 22, eating breakfast and getting an updated briefing before 75 vintage Piper J-3s began launching just after sunrise—heading for EAA AirVenture in Oshkosh and continuing their celebration of the iconic airplane’s seventy-fifth anniversary.

The commemoration, Cubs 2 Oshkosh, was organized by Rick Rademacher, a passionate Cub owner and pilot from Urbana, Ohio, and Steve Krog of the Hartford-based Cub Club. Dana Osmanski of the Cub Club headed up the logistics; she enlisted vendors and 85 volunteers to help with transportation, meals, a Friday-night fish fry, a Saturday pig roast, and entertainment. 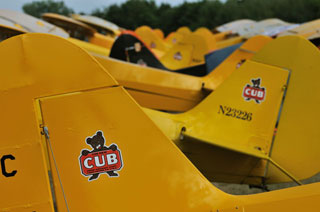 Weather kept many of the more than 130 registered Cubs from reaching Hartford (Wis.) Municipal Airport in time for the event, although there were 85 Piper J-3s registered at the time of Saturday’s evening banquet, and a number of J-5s and other Cub iterations put the number of vintage Pipers at more than 100.

The first Cub took off from Hartford at 5:56 a.m. to begin the 39-nautical-mile journey north to Oshkosh, and the seventy-fifth lifted off into the cool Wisconsin morning air at 6:41 a.m. The Cubs began landing on Wittman Regional Airport’s runways 36 Left and 36 Right at 6:54 a.m., according to an AirVenture tweet.

Of course, for most participants, the journey began much earlier. Some pilots had departed their home airports more than a week earlier, flying Cubs from as far away as California and Oregon to participate.

Jim and Lynne Finley of New Orleans flew 16 hours over four and a half days. Actually, Jim flew their 1946 J-3 while Lynne drove to haul their luggage. “She had me beat on every leg, except into [Hartford],” Jim said.

They owned a Cessna 210 for 30 years, selling it two years ago and buying the Cub. “We’re not new to the aircraft,” Lynne noted. “He trained in a Cub, and I trained in a Taylorcraft, so we’re home.” 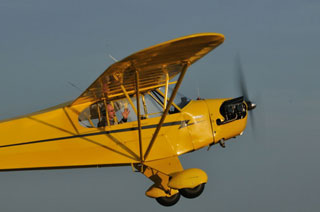 “The airplane actually shrank. When I learned to fly in it when I was in college, the cockpit was much larger,” Jim laughed. “The Cub brings you back to what flying was all about. It’s fun. People come out and talk to you when you land somewhere in a Cub.”

Les Shannon, of Conroe, Texas—near Houston—finished the final details of a restoration on his a 1941 J-3 literally hours before departing for Hartford.

Glen Marshall of Capitola, Calif., made the journey in his 1940 Piper J-5A—a three-seat Cub. He flew north to Oregon and then turned east to reach Wisconsin. Marshall’s first airplane “has no starter and no electrical system,” he said. “I’m getting in touch with my inner barnstormer.”

Cubs 2 Oshkosh certainly seemed to accomplish Rademacher’s objective of connecting pilots in the Cub community, inspiring cross-country group adventures, celebrating the iconic flying machine—and helping to get children interested in aviation and the airport. “At one point in time in the ’40s, ’50s, and ’60s, every kid knew a Piper Cub,” Rademacher said, “Nowadays, kids have no clue.”

One noteworthy exception is the Eighty-Eight Charlies. Participants in the nonprofit organization’s efforts to promote aviation by giving students the opportunity to restore real airplanes rose early each day to prepare breakfast in Hartford for pilots and their guests. The group takes its name from the identifier for their home field, Palmyra County Airport, which is 88C. The first aircraft restored by the young people, primarily ages 12 through 18, was a Piper Cub.

Technical Editor
Mike Collins, AOPA technical editor and director of business development, died at age 59 on February 25, 2021. He was an integral part of the AOPA Media team for nearly 30 years, and held many key editorial roles at AOPA Pilot, Flight Training, and AOPA Online. He was a gifted writer, editor, photographer, audio storyteller, and videographer, and was an instrument-rated pilot and drone pilot.
Go to Mike Collins's Profile
Topics: EAA AirVenture, Events, Navigation