Get the app Get the app
Already a member? Please login below for an enhanced experience. Not a member? Join today
News & Media Teachers get tips for bringing aviation into classroom

Teachers get tips for bringing aviation into classroom

Educators from all grade levels descended on EAA AirVenture 2012 for the fourth consecutive Teachers Day, held July 24 and sponsored by Build A Plane, the General Aviation Manufacturers Association, and the Experimental Aircraft Association. Among those extending a welcome to participating teachers was AOPA President Craig Fuller.

“Thank you for all you do,” Fuller told the educators. “We all need to bring more pilots into aviation,” he said, explaining his love for flight and noting that the U.S. pilot population has fallen from a high of 800,000 to about 600,000 today. There’s a great connection between aviation and science, as well as math, he added. 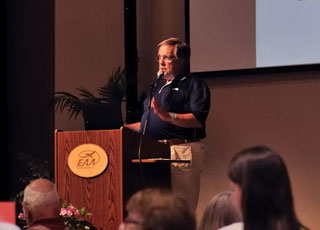 Fuller said that AOPA will introduce a new program later in the week to promote aviation to youth ages 12 to 18. “We are doing everything we can to bring more people into flight training,” he said.

Many Teachers Day sessions offered presentations and materials from aviation organizations, private industry, and the federal government that are ready for classroom use.

Among the presenters was Paul Lupton of EAA Chapter 1158 in West Bend, Wis., which has operated an Air Camp each summer for the past 13 years. Lupton said the camp accepts 16 young people each year. “We’ve had more than 200 kids come through the Air Camp,” he added.

During breaks and in breakout sessions, Lupton shared a number of experiments and demonstrations with the teachers. “Part of science is creating experiments,” he said, adding that his objectives are to teach critical observation skills and to show the flaws of nonscientific thinking.

Lupton is adding information on several experiments to the chapter’s website. One, the Cartesian Diver, “starts out looking like a magic trick but you end up teaching important lessons about aviation,” he explained. Another, the Cloud in a Jar, teaches about pressure. “The hard thing teaching anything about air is that it’s invisible.” 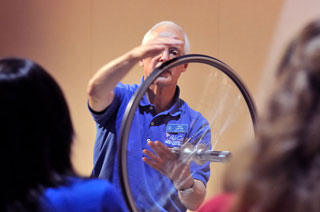 Ralph Coppola spoke on behalf of the Real World Design Challenge, an annual high school competition started in 2008 and run by a public/private partnership with the goal of increasing the science, technology, engineering, and mathematics (STEM) workforce in the United States.

His organization provides professional engineering tools to teachers and their students at no charge. “When we talk about competitiveness in a global environment, we ask what we need to compete,” Coppola said. STEM education and innovation are the two requirements.

“We wanted the Real World Design Challenge to be a driver of the innovation we really need,” added Coppola, who is being recognized this year by the National Conference on Aviation and Space Education with its Crown Circle Award for his efforts.

Technical Editor
Mike Collins, AOPA technical editor and director of business development, died at age 59 on February 25, 2021. He was an integral part of the AOPA Media team for nearly 30 years, and held many key editorial roles at AOPA Pilot, Flight Training, and AOPA Online. He was a gifted writer, editor, photographer, audio storyteller, and videographer, and was an instrument-rated pilot and drone pilot.
Go to Mike Collins's Profile
Topics: Aviation Organizations, Experimental Aircraft Association, EAA AirVenture