Get the app Get the app
Already a member? Please login below for an enhanced experience. Not a member? Join today
News & Media Congressmen expect long fight over user fees 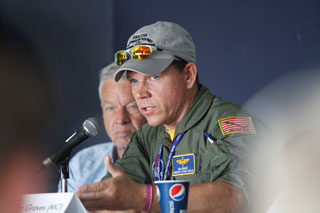 Rep. Sam Graves (R-Mo.), co-chairman of the House GA Caucus, called on pilots to make sure they belong to as many organizations as possible to amplify the voice of general aviation and prevent GA from being doomed by user fees.

General aviation faces a life-or-death struggle in years to come, as the White House and Congress lock horns over user fees. House GA Caucus Co-Chairman Sam Graves (R-Mo.) said there is no end in sight to the White House push to extract dollars from pilots—piston or otherwise—and the stakes are high.

“It would destroy general aviation, absolutely destroy it,” Graves said of the bid to raise general fund dollars that most recently took the form of a $100-per-flight fee for turbine aircraft using air traffic control services. “We’re committed to fighting.”

Graves was joined by aviation subcommittee Chairman Tom Petri (R-Wis.), Rep. Reid Ribble (R-Wis.), and Rep. Blake Farenthold (R-Texas), each a longtime GA supporter, for a Congressional Town Hall discussion at EAA AirVenture in Oshkosh, Wis., July 27. AOPA President Craig Fuller was among the audience, often nodding in agreement as Graves and his colleagues called on the audience to take action—and join one or more of the aviation associations (AOPA and EAA chief among them) working hard to make sure the voice of the entire aviation community is heard as decisions are made.

“You need to belong to as many of them as you possibly can,” Graves said. “They’re all out there fighting for you.”

When it comes to lobbying, personal messages from pilots do get attention, more so than a form letter, said Farenthold. Better still, when possible, is an in-person visit. “That really gets my attention,” said Ribble.

Graves said that the EPA push to limit the use of avgas ranks among his top two concerns for the future of aviation, along with user fees. The four congressmen in attendance were all committed to protecting the availability of fuel until a safe and suitable replacement can be developed and distributed. Petri noted that there is some federal investment in research, though more can be done. “It’s not being ignored,” Petri said.

More than one member of the audience was concerned about the proliferation of unmanned vehicles, and the threat they pose absent proven ability to see and avoid air traffic. Another issue on the minds of audience members is the joint AOPA/EAA petition for an exemption to allow pilots to fly aircraft slightly larger than LSA standards under certain circumstances without a third-class medical—an effort the congressmen have personally supported with a letter to the FAA.