Get the app Get the app
Already a member? Please login below for an enhanced experience. Not a member? Join today
News & Media Aviation Day draws crowd in Fairbanks

The Fairbanks, Alaska, aviation community rolled out the welcome mat for 2,000 of its neighbors—probably including some future aviation professionals—for an aviation day event at Fairbanks International Airport.

AOPA participated in the activities, which were organized by the airport’s operators council.

The May 19 event provided the public a glimpse of the critical role aviation plays in Alaskans’ everyday lives. It offered 13 exhibits and gave spectators a chance for close-up inspections of 25 display aircraft.

AOPA’s display at Fairbanks Aviation Day drew visitors curious to learn the answer to the question “What is General Aviation?”—the subject of one of 15 educational mini-seminars. Heidi Williams, AOPA vice president of air traffic services and modernization; Ron Dearborn, AOPA Airport Support Network volunteer for the airport, and Tom George, AOPA Alaska regional manager, were on hand to talk about GA with the visitors. 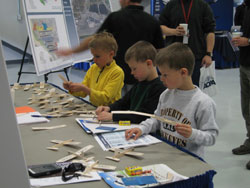 With interest running high, volunteer pilots from the Experimental Aircraft Association (EAA) worked beyond the event’s scheduled end time to provide airplane rides to all 157 youngsters who had signed up for flights made available by EAA’s Young Eagles program.

Simulation provided FAA staffers with an opportunity to have more than 150 people taxi, take off, and land at a scale-model airport while receiving clearances and instructions from real-life air traffic controllers.

“It was a fun, family-oriented event that generated lots of interest in kids of all ages,” said George. “And they are the future pilots, air traffic controllers, mechanics, and airport managers.” 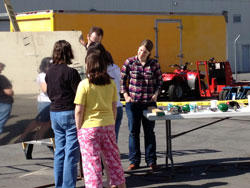 Attendees try their hand at a riveting contest.

The event also showcased for the youngsters’ parents the aviation facilities and infrastructure that are supported and maintained with public funds, he said.