Near-perfect weather and an enthusiastic crowd were an ideal recipe for Learn to Fly Day at the Frederick (Md.) Municipal Airport on June 2. The event, sponsored by AOPA and the airport, drew an estimated 600 people throughout the day; volunteer pilots flew 258 passengers.

“There was a line of people waiting when we opened,” said Brittney Miculka, AOPA manager of prospective pilot and youth outreach. From 10 a.m. until 3 p.m., AOPA offered free familiarization flights to visitors ages 8 and up, on a first-come, first-served basis; a static aircraft display; and a variety of other aviation activities. Registration for the free flights had to be cut off around noon, when the day’s quota had already been exceeded, she said. “We had about 150 [flights] last year,” said Miculka, who was hoping to accommodate about 200 passengers this year.

James Gallagher of Monrovia, Md., came out to the airport with his daughter, Caitlin. “How often do you get to fly in a plane for free?” he asked. “I’ve been in regional jets, but not a prop plane. It was fun. It was very compact—it reminded me of being in a small car.” They flew in a Diamond DA40 piloted by Dan Dedona.

“I thought it was very interesting,” said 16-year-old Caitlin. “I’ve never seen Frederick from the air before. I recognized a lot of places that I’d seen on the ground.” She said she’s thinking about joining the Navy, and would love to fly if the opportunity presented itself. 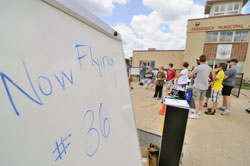 Airport visitors wait their turn for a flight.

Both said they’d like to fly again. “You get a truer sense of flying” in a small airplane, James said.

Learn to Fly Day was the first visit to the Frederick airport for Shawn Kelly of Mt. Airy, Md., and his son Brandon, 14. “It was great. It was a lot smoother than I thought it would be in a small airplane,” said Shawn, who had never flown in a small airplane before. He said the glass cockpit of the Cirrus SR20 in which he flew “looks like a video game.”

Brandon had flown once before in a small airplane, in Hawaii. “This one was an easier takeoff,” he said. Brandon, who would like to learn to fly sometime, shared his father’s fascination with the airplane’s instrument panel. “I liked that GPS,” he said.

“It costs money, but it’s a wonderful, wonderful benefit when you get a pilot’s license,” pilot Jeff Bassett told them after their flight. “It’s yours forever.”

AOPA President Craig Fuller flew Civil Air Patrol cadets and Aviation Explorers volunteering at the event for flights in AOPA’s Cessna Caravan. To help accommodate the crowd, he stayed longer at the airport and flew an additional load of passengers.

Lined up on the ramp, airplanes await their next passengers. Local EAA Chapter 524 provided aircraft marshaling.

The event was part of a worldwide effort. International Learn to Fly Day took place at most airports on May 19. However, Frederick organizers decided to reschedule the free, day-long event—designed to introduce the local community to general aviation—because the national date fell in the middle of the G8 Summit held at nearby Camp David, Md. The summit was the largest gathering of world leaders ever held at the secluded presidential retreat, and was accompanied by significant temporary flight restrictions. 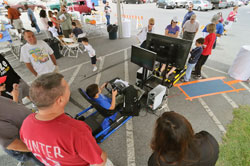 Volunteers from AOPA and the airport community made the event possible. “I was here early and talking with people who were waiting in line,” said Rob Hackman, AOPA vice president of regulatory affairs. “Most of them said, ‘I knew there was an airport in Fredrick, but I’ve never been here before.’ They think [Learn to Fly Day] is great. The next time something comes up involving the airport, these folks will remember this day and the fact that it’s their friends and neighbors out here flying these aircraft, and be supportive.”

“One of our pilots was walking around downtown yesterday and was spotted by a family that he had flown. They stopped him and thanked him again and said that the family hasn’t stopped talking about the flight since they landed,” Miculka said. “One family I spoke to said that our airport and airport restaurant is a hidden gem and will now be on their list of places to visit again and again.”

Technical Editor
Mike Collins, AOPA technical editor and director of business development, died at age 59 on February 25, 2021. He was an integral part of the AOPA Media team for nearly 30 years, and held many key editorial roles at AOPA Pilot, Flight Training, and AOPA Online. He was a gifted writer, editor, photographer, audio storyteller, and videographer, and was an instrument-rated pilot and drone pilot.
Go to Mike Collins's Profile
Topics: Training and Safety, Registration, Ownership