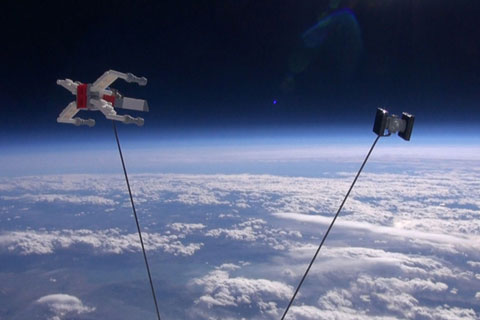 A Star Wars battle was staged over the Nevada desert in March by a California organization that has worked for years to inspire interest in science. Photo courtesy JP Aerospace.

In the uppermost reaches of Earth’s atmosphere, an “epic space battle” was joined March 31, hoping to catch the eye—and imagination—of the next generation of aeronauts, astronauts, and aviators.

The Star Wars-inspired matchup was coordinated with science experiments supplied by schoolchildren around the world. Students from New Zealand, Japan, and the U.S. packed ping pong balls dubbed PongSats with small-scale experiments launched to towering heights—97,704 feet. In that most rarefied air, a tiny TIE fighter and a tiny X-Wing fighter squared off. 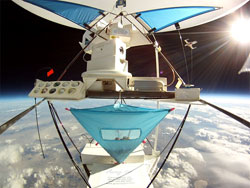 “The force was with the little ships as they chased each other around the sky mounted on wires and a servo,” announced JP Aerospace, the brainchild of John Powell, who runs “America’s other space program” with volunteers, donations, and the sale of high-altitude advertising opportunities. “After the battle they descended by parachute and landed forty miles downrange. “

Powell previously launched Star Wars action figures aboard a similar rig in 2005, along with a batch of student-designed experiments—flown at no charge and returned to their young designers.

"Star Wars helped inspire a lot of us to study space" Powell said in a June 1 press release. "We want the help kids do something with that inspiration."

More than 6,400 experiments have flown to date, with more than 20,000 students participating in their design, Powell announced. He also builds paper models for high-altitude flight. A paper model of the Gemini capsule was sent to the edge of space in April to mark Project Gemini’s fiftieth anniversary year.