Forecasters use your pireps


Bumping in the soup with the freezing level not far above and a complex re-routing to program in the GPS might not be the time for it, but a pirep will be gratefully accepted—even after landing.

In the nation’s thunderstorm nerve center, forecasters are fed around the clock with a stream of data that forms a detailed snapshot of the atmosphere. Technology has come a long way since Storm Prediction Center Operations Chief Bill Bunting began his career a quarter-century ago, but there is still no replacement for eyes on the ground, and in the sky, Bunting said.

“Pilot reports: send them early, send them often,” Bunting said, just outside a glass-windowed office packed with flat screen displays arrayed in clusters around meteorologists who studied screens in near silence. “Pireps are essential.”

A steady stream of weather balloons help fill in gaps between major airports, where commercial aircraft are often beaming back real-time data about winds aloft, moisture, and many other variables. Bunting said dual-polarization radar, able to distinguish precipitation types like never before, is coming on line across the country, and computer models have advanced rapidly the ability to forecast severe weather—conditions conducive to significant storms can now be predicted up to eight days in advance.

Despite all of the whiz-bang, there’s still no substitute for knowing the “ground truth” about current conditions, Bunting said.

“It’s all pieces of the puzzle [that] collectively give us a good picture of the current state of the atmosphere,” Bunting said.

Even a seemingly routine report can provide a valuable piece of the puzzle.

The Aeronautical Information Manual details many different ways that pireps are put to use: weather forecasting, routing of current and future flights, and sounding alarms about dangerous conditions. A pirep can be the first indication that trouble is brewing in a particular place, the trigger for an advisory or alert.

The FAA directs air traffic controllers and flight service station personnel to solicit pireps, particularly when potentially dangerous conditions such as thunderstorms or icing are observed. If an in-flight pirep is not practical (you just hit your head on the ceiling in an air pocket, and that might just be light rime on the wing), a post-flight telephone report to flight service is still prized—and useful to more than fellow aviators. 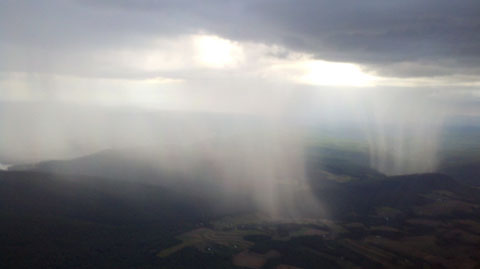