Get the app Get the app
Already a member? Please login below for an enhanced experience. Not a member? Join today
News & Media The Wright stuff: How to tame a horse

The Wright stuff: How to tame a horse

The spruce-and-fabric structure pitched and bobbed in the coastal wind like a giant kite. Supported only at my ankles, hips, and elbows, I looked out over the dunes and mentally prepared to launch head-first off a hillside.

Bruce Weaver, manager of the Kitty Hawk Kites hang gliding school, had invited me to Jockey’s Ridge State Park, just miles from the site of Wilbur and Orville Wright’s first flights in Kill Devil Hills, N.C., to fly a reproduction of the brothers’ 1902 glider. Resting prone on the 112-pound structure, I flexed my forearms and the nose nodded up and down—it’s sensitive in pitch, warned Weaver, who has trained instructors to offer flights in the historic aircraft this summer.

I swung my hips to the left, and the glider slowly nosed in that direction. To the right: another obedient response. I was ready for launch. With employees of the school anchoring ropes at the nose and either wingtip, my tethered flight would be considerably less risky than the brothers’ free flights over nearby dunes. Even so, as the instructors broke into a run and the elevator control wobbled in my grip, my heart raced with the realization that I was no mere passenger on a kite. I was in control.

This summer, students can try their hand at the glider that laid the groundwork for the Wright brothers’ historic 1903 powered flight.

Wilbur compared learning to control a flying machine to learning to ride an untamed horse: You can either jump on it and learn by practice, or “sit on the fence and watch the beast a while, and then retire to the house and at leisure figure out the best way of overcoming his kicks and jumps. … [I]f you are looking for perfect safety, you will do well to sit on a fence and watch the birds; but if you really wish to learn, you must mount a machine and become acquainted with its tricks by actual trial.”

Even after extensive wind tunnel testing, it takes considerable courage—and airmanship—to launch off a dune carried only by one’s own invention. Discovery of Flight Foundation Executive Director Paul Glenshaw, whose organization is providing the reproduction to Kitty Hawk Kites for the flights, said he hopes the Kitty Hawk Kites flights will give people a new appreciation of who the men were as designers, as engineers, and most importantly as pilots.

“It’s not easy, and it took guts to do it,” he said of their achievement. The Wrights took the glider to much greater heights than I, and without the benefit of helmet or harness.

AOPA Live Producer Paul Harrop and I trudged out to the launch site this June to recreate the brothers’ flights in a controlled environment. With 20- to 25-mile-per-hour winds—“Wright brothers wind,” as Weaver described it—the glider leapt off the ground with a little assistance from the instructors. They held me aloft for a moment while I wiggled the elevator up and down, and then made a beeline down the dune. 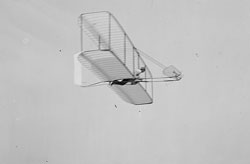 Wilbur believed that to learn to fly "you must mount a machine and become acquainted with its tricks by actual trial."

While unstable, the glider is surprisingly responsive. As the instructors began running, I expected to battle wild oscillations in pitch, and prepared for the possibility of an abrupt and bruising end to the flight. But the ropes kept me from straying from normal attitudes as I developed a feel for the airplane, and after a few flights I grew comfortable relaxing my grip on the elevator control, allowing the front elevator—or front rudder, as the Wright brothers dubbed it—to flap in the wind in what Weaver described as the “sweet spot.”

It’s unnerving to watch a control surface oscillate in front of you, but it worked. With my eyes fixed on a yellow house across the water, I made minor directional corrections, pushing my hips to one side or another and waiting for the slow but marked turn. The Wright brothers’ innovative wing warping method helped crack the code of aircraft control, but the glider takes a moment to respond to roll input.

The flare came naturally but had all the finesse one would expect from setting spruce down on sand. The tail dragged first, and then the rear of the lever controlling the front elevator dug in and the nose planted. By the end of the afternoon I was checking my elbows for bruises.

A few flights into the experience, the aircraft picked up speed and the instructors trailed behind it, letting out slack in the ropes to allow me to soar. I traveled a couple hundred feet at a stretch, staying aloft for half a minute or more. Weaver estimated that I was the seventy-fourth person ever to fly a 1902 Wright glider, including the Wrights themselves.

The 1902 glider was a breakthrough, Glenshaw explained, because it was the first aircraft incorporating the Wrights’ newly calculated coefficients of lift and drag and other data gathered from wind tunnel testing. This design provided the foundation for the 1903 powered airplane and validated the conclusions the brothers had reached based on rigorous testing.

“Arguably it’s the most important aircraft they built,” said Glenshaw. “… It’s the thing that cracked it open for them.”

After disappointing flights in 1901, the brothers went back to the drawing board for the 1902 model, reexamining the previously accepted coefficients of lift and drag and other assumptions. Using their own coefficients of lift and drag derived from extensive testing, the pair developed a more efficient wing: The 1902 glider produced far greater lift than the 1901 glider, with only a slight increase in wing area. 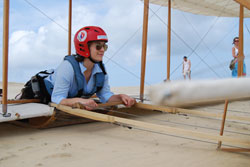 The aircraft has no useful load, per se, but was designed to carry the Wright brothers, each about 140 pounds; Weaver said the reproduction—made of original materials, save a few minor modifications (modern cotter pins, cable cross wiring, and the luxury of duct-taped cushions on the hip cradle and ankle rest)—recently carried a pilot who was about 260 pounds. I weigh a little less than a Wright brother, and the aircraft had lift to spare. “There were a couple of times today when I was right on the verge of airborne,” Kitty Hawk Kites hang gliding Assistant Manager Andy Torrington, who had held a rope on the right wing, told me at the end of the afternoon.

Wright aircraft reproduction builder The Wright Experience made the fastidious re-creation for The Discovery of Flight Foundation in advance of the centennial of flight celebrations in 2003, when pilots flew the glider and other Wright reproductions. Accomplished pilots who learned to fly the glider in 2002 were amazed by the simplicity and sophistication of the machine, Glenshaw said. When they made the 1902 glider, the brothers had only been at the problem for three years.

But there’s no mistake in the Wrights’ accomplishment, he said: “The Wright brothers were not two lucky bicycle makers. They were truly the first successful aeronautical engineers.”

Neither had gone to college, and neither had officially graduated high school, he said, but they were good at algebra and trigonometry. They followed a rigorous testing regimen and had the courage to put their ideas into action. “That’s what it takes to make these big leaps forward,” he said. It’s a lesson the Discovery of Flight Foundation tries to teach in museums and school visits as well as by giving the public a rare opportunity to fly the 1902 glider.

“The whole point of it is to get it out there so people can have that connection,” he said. 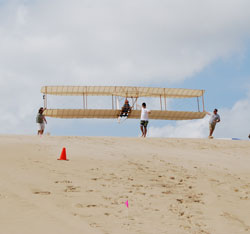 After the Wrights completed their flights in the glider in 1902 and 1903, they left it in Kitty Hawk, where it sat unused for years. Likewise the reproduction sat in a hangar in Virginia after an initial round of flights for the centennial. Kitty Hawk Kites Founder and President John Harris had been corresponding with the foundation about use of the glider since it flew on the dunes in 2002 and 2003. Then, in 2011, Glenshaw and his son went to Kitty Hawk Kites so his son—who had flown the glider at age 8 the first time around—could earn his Hang 1 hang gliding certification. Glenshaw and Weaver put their heads together and decided that “it’s not doing anybody any good sitting in a hangar where no one can see it,” Weaver said. So the foundation granted the hang gliding school use of the glider to offer instruction to the public.

Finding “Wright brothers wind” is the main challenge for these flights, so Weaver said the school plans to ask students to reserve three days over a weekend this summer, with the intention of flying on one of them. For $349 each, up to five students per class will participate in a learning experience like mine. Both organizations expect the aircraft to incur some wear and tear—and it already has. But it’s worth it to them to let people experience history.

“[The Discovery of Flight’s] take on it is, the Wright brothers used theirs a lot, too,” Weaver said.

Indeed, the Wrights made hundreds of flights in the fall of 1902, and Orville made his first free glides in the 1902 glider. (Wilbur had piloted all the free glides in 1900 and 1901.) Climbing onto the wooden frame, the historic flights of more than 100 years ago come alive. The sensation is foreign yet familiar; with its sleek composite structure, advanced avionics, and smooth ride, the Diamond DA40 I flew to the Outer Banks that day still relied on principles proven on the dunes of Kill Devil Hills. And for the hang gliding instructors who routinely launch off of the dunes on craft less than half the weight of the Wright glider, their tie to the fathers of modern aviation is palpable.

“There’s a connection. There’s a very, very deep connection to what they were doing, because we’re still doing it,” Torrington said. “… They had to have been having a blast.”