Get the app Get the app
Already a member? Please login below for an enhanced experience. Not a member? Join today
News & Media History, and a hot dog

History, and a hot dog

A South Carolina pub owner with a passion for flight plans to breathe new life into the aviation history of his state’s capital city.

Private pilot Scott Linaberry and three partners have found perfect props for their project to promote aviation awareness in their community: a hangar designated a historic landmark, and a partly restored World War II bomber that’s housed inside. The B-25 Mitchell was fished out of a local lake where it crashed in 1944, on D-Day.

Good stuff to work with if you happen to believe, as Linaberry does, that restoring the Curtiss-Wright Hangar at the Jim Hamilton L. B. Owens Airport in Columbia, S. C., as a combination restaurant, event center, and hands-on museum would produce a community destination—and asset—that draws attention to its aviation history.

Still, there’s a lot to do before the hangar, which was the first permanent structure on the airport when the field opened in April 1930, plays host to youngsters eager to wiggle their way into the B-25 and munch lunch in an aviation-themed restaurant. 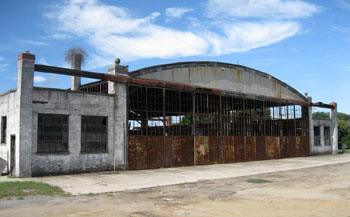 Linaberry, 40, and the three other principals of C-W Hangar Partners LLC have submitted their plans for the hangar and 1.5-acre parcel of land to Richland County officials, who had solicited proposals for developing the property. No other plans were submitted, Linaberry said.

The partners hope for a response late next month to their plan to renovate the county-owned property that was added to the National Register of Historic Places on April 30, 1998.

Then there are grant funding sources to explore, and decisions to make about restoring the structure in a way that preserves its historical authenticity while making it functional and cost-effective in support of a modern venture.

The partners hope to have renovations to the 12,000-square-foot hangar completed by Veteran’s Day 2013. But a more realistic target date might be Memorial Day 2014, Linaberry said in an interview.

On either timetable, they are confident that the hangar and airplane present the perfect proxies for an effort to educate and entertain about the region’s role in aviation. 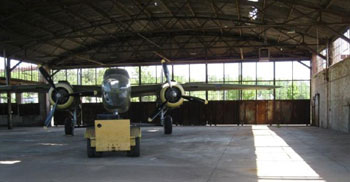 “Initially, the hangar was used to house aircraft to support passenger and airmail services to the Columbia area and then became the headquarters of the South Carolina Aeronautics Commission,” says a project summary. “Later, it was used for the civilian flight training programs and finally for general aircraft maintenance. During the 1930s, Owens Field had the distinction of hosting many well-known aviators and dignitaries, including Amelia Earhart and President Franklin Delano Roosevelt.”

The developers believe that Columbia’s downtown area, local military bases, the University of South Carolina, visiting pilots, and a nearby athletic complex all would draw people to the aviation attractions in Columbia, population about 129,000 and the capital of South Carolina. Many thousands of kids and families visit a YMCA park across the street from the airport, Linaberry says.

“I want them all to learn something and get interested in it,” Linaberry said.

He envisions youngsters coming to the facility, having a meal, climbing through the partly restored B-25—it crashed into Lake Greenwood, S.C., during a training mission on June 6, 1944—and learning of the role the aircraft and its crews played. For many years the hangared bomber was among the aviation and military vehicles owned by a nonprofit organization that previously rented the premises. The B-25 is now owned by the South Carolina Historic Aviation Foundation.

Linaberry, who is a member of the foundation’s board, grew up in New Jersey. At age 11, he received his first airplane ride in his stepfather’s Cessna 172.

“I got the bug right then and there.”

Grown up and living in Columbia, the sound of airplane engines overhead served as a reminder of his passion. Three years ago, Linaberry completed training for his private pilot certificate. He bought a Piper Archer as his first airplane, and now is “looking for a faster one.”

Having bought the buildings in which his two bars are housed, Linaberry was working with a developer on the properties. 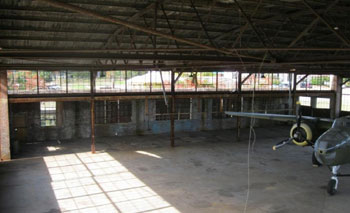 “The next week he came to me and asked if I wanted to be part of this thing,” he said, explaining how he came to be the operations-and-finance member of the hangar restoration team that includes Edwin B. Garrison as managing partner; architect Joseph O. Rogers; and Ben S. Riddle, who handles marketing and project analysis.

The project’s educational and historical appeal for Linaberry is augmented by the chance to bring aviation more intimately into his life.

“I wanted to find a project to put my heart and soul into, and be proud of it,” he said.