Get the app Get the app
News & Media Pipers flock to Cub&rsquo;s birthplace

Dozens of Piper Cubs—and a wide variety of other aircraft—descended on Lock Haven, Pa., for the twenty-seventh Sentimental Journey to Cub Haven Fly-In held June 20 through 23. The annual event celebrated the seventy-fifth anniversary of the venerable Piper J-3 Cub, which first flew from Lock Haven in 1937 and was produced there for 10 years.

The four-day event offers a lot of fellowship, as well as forums and several flying events. Pilots regularly travel to Sentimental Journey from as far away as California, although a majority come from the Mid-Atlantic and northeastern states.

Gregory McKnight of Ottsville, Pa., was there with his 1943 Piper J-3 Cub—an airplane that his father flew in 1946. McKnight searched the FAA aircraft registry online for the registrations of airplanes his father had flown; located this Cub not far from where he was working at the time; and purchased it from its owner six months later.

The airframe had been stored in a barn, and McKnight restored it several years later. He said it was his first aircraft restoration project, and his handiwork would have made his late father—who had been an airline mechanic—proud. McKnight’s airplane was named Grand Champion at the 2011 Sentimental Journey fly-in.

McKnight’s first flight in the airplane was 62 years to the day after his father had flown it. “I got the flight in between two thunderstorms,” he said. “It was something I wanted to do.”

But the airplane’s story doesn’t end there. Some unusual serial numbers discovered during the restoration indicated that the airframe originally was built as a Piper TG-8, one of 253 training gliders Piper made during World War II to train glider pilots for the D-Day invasion. When it was no longer needed, the airframe was converted to an L-4, and then certificated as a J-3. Except for squared-off rear windows and a slightly different throttle placement—it’s located where the TG-8’s towrope release was positioned—the airplane is identical to production Cubs of the era. 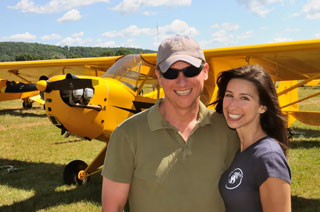 Tom Boardman and Alicia Brindisi won the bomb drop with a bullseye.

Tom Boardman of Albany, N.Y., has had a Cub for six years, but the four-hour flight to Sentimental Journey was his first in the 1939 Cub he had refurbished over the past three years. He decided to enter the bomb drop contest and scored the first perfect bull’s-eye at Sentimental Journey—at least, as far as any fly-in volunteers or staff could remember—by dropping a paper bag of flour into a bright-pink, three-foot-diameter children’s wading pool.

“She gets all the credit,” Boardman said of bombardier Alicia Brindisi, of East Haddam, Conn. “I was just driving the bus.” Boardman said there was a bit of wind from the north, so on his third pass, he adjusted his track—but that made the lineup harder to see. “On the third drop, we both saw it—it was like, poof. Sometimes magic just happens.”

“We were screaming,” Brindisi said. “It was a beautiful thing to see it fall into that pool. It was like slow motion. There were no two other people who were as surprised as us.”

Boardman said they were thinking about just retiring, rather than trying to defend the title next year. While there were no other direct hits, a number of pilots came very close to the target.

Tadd Garcia flew his 1946 J-3 Cub to Sentimental Journey from Pittsburg. It was the airline pilot’s third visit to Sentimental Journey. “I bid for vacation this week every year,” he said. A pilot since 2000, he’s owned the Cub just more than two years. “I wanted to go back to basic flying. We’re flying these things with automated everything, and I liked the idea of going back to a basic airplane.”

Garcia flies the Cub 75 to 100 hours per year. “I just like cruising around on a nice, smooth evening with the window open,” he said. “Gas is still expensive, but at least this airplane makes it somewhat manageable.” 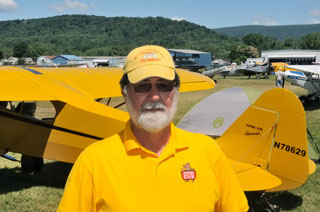 Jeff Fontenot and his Piper PA-11.

Jeff Fontenot trekked to Lock Haven from Richmond, Texas—near Houston—in his 65-hp Piper PA-11 Cub Special for the first time. “It took me about 17 hours over the course of four days,” he said—the longest flight he’s ever made. Fontenot and his wife had visited the event four years ago, when they had flown commercially to Pennsylvania during a vacation.

“I did Oshkosh last year and it was pretty easy,” he said, adding that this trip provided his first experience flying in mountainous terrain; turbulence the first day almost caused him to turn around, but friends encouraged him to stick it out. He was glad he did.

“This is fantastic,” Fontenot said. This is the best kind of fly-in to come to. There are things that aren’t in the program that make this incredible.”

Dave Richardson won the spot landing contest flying a 1947 Piper PA-11 Cub Special, and Bill and Brandi Terkeurst took first place in the poker run with a hand they collected in their 1954 Cessna 170B. Winners of the aircraft judging completion are on the Sentimental Journey website. Next year’s fly-in is scheduled for June 19 to 22.

Technical Editor
Mike Collins, AOPA technical editor and director of business development, died at age 59 on February 25, 2021. He was an integral part of the AOPA Media team for nearly 30 years, and held many key editorial roles at AOPA Pilot, Flight Training, and AOPA Online. He was a gifted writer, editor, photographer, audio storyteller, and videographer, and was an instrument-rated pilot and drone pilot.
Go to Mike Collins's Profile
Topics: Takeoffs and Landings, Technique, Aviation Industry