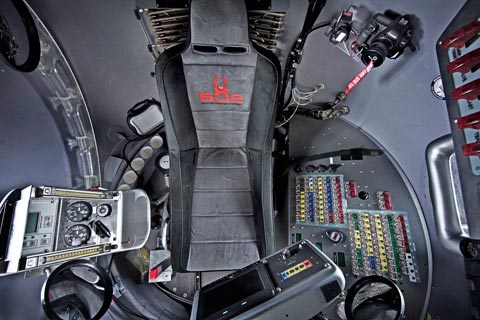 A test flight of the Red Bull Stratos balloon and capsule that will carry parachutist Felix Baumgartner to a record-setting high-altitude jump could occur in Roswell, N.M., as early as next week. Weather does not appear to be cooperating, since a storm is coming through this weekend and winds for the flight must be less than four knots. The test flight, whenever it occurs, will reach 90,000 feet, just 30,000 feet short of the intended record attempt.

No date has been announced for the actual flight. 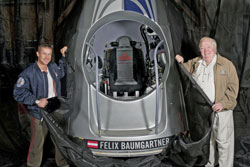 How long could you freefall from 120,000 feet? The answer, says Red Bull Stratos officials, is five minutes and 30 seconds. During that time Felix Baumgartner of Austria is expected to break the sound barrier with his body at 690 mph, unless the sound barrier breaks him first. The human body’s ability, and that of the new spacesuit design, to withstand passage through the sound barrier is trumpeted as one of the great unknowns of the attempt. The goal is to break the high-altitude jump record now held by former U.S. Air Force Col. Joe Kittinger for more than 50 years. Kittinger dove from 102,800 feet.

All is ready, say Red Bull officials. The pressurized capsule Baumgartner will use for the three-hour ride to 120,000 feet is ready for the flight. It was decided to use an enclosed, heated, and pressurized capsule, rather than the open capsule Kittinger used, to protect Baumgartner from minus-70-degrees Fahrenheit temperatures and lack of oxygen. He will inflate his spacesuit only prior to opening the clear door and exiting the capsule. The capsule will then be recovered by parachute.

The spacesuit could be used to protect passengers on future spaceflights, a press statement issued by Red Bull claims.