Get the app Get the app
AOPA will be closed July 4th, in observance of the Independence Day holiday. We will reopen at 8:30 am ET on Tuesday, July 5.
News & Media NASA rockets will spread a ghostly glow 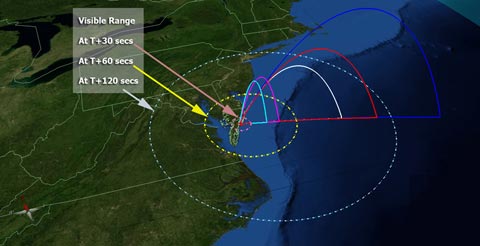 Five rockets launched in rapid succession from the NASA Wallops Flight Center in Virginia will light up the night sky for hundreds of miles.


A salvo of five rockets will soon be launched from the NASA Wallops Flight Facility on Wallops Island, Va., to help scientists better understand the uppermost reaches of the atmosphere. The interaction of wind and charged electrical particles 60 to 65 miles from the surface has been associated with satellite failures and radio communication interference.

The launch will take place on a clear night between March 14 and April 3, and the rockets will release trimethylaluminium, which creates a soft, white glow when it interacts with oxygen, producing aluminum oxide, water, and carbon dioxide. Cameras in Virginia, North Carolina, and New Jersey will track the movement of the milky white clouds, allowing scientists to model upper-atmosphere winds. NASA has also invited amateur photographers to submit photos of the clouds. The launches will take place between 11 p.m. and 6:30 a.m., marking the first time since the 1970s that NASA has launched so many rockets from Wallops Island at once, officials said. The chemical traces will be visible for about 20 minutes, and may be seen as far north as southern New Hampshire and Vermont, and as far south as the South Carolina border.