New fuel-sipping Rotax on the market 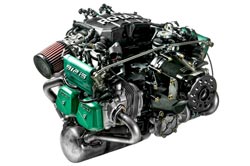 Sporting an electronic engine control system designed to optimize mixture at any altitude, the Rotax 912iS was unveiled March 8 in Austria. Bombardier Recreational Products (BRP)—the Austrian maker of Rotax engines—already dominates the light sport aircraft market, and engineered a more fuel-efficient version of the popular 912 engine in response to market demand, according to President and CEO José Boisjoli.

“The Rotax 912 iS engine is the result of this engagement and our commitment to always exceed consumers' expectations,” Boisjoli said in a news release.

Mass production of the 912iS is scheduled to start in May. The company claims an integrated, redundant, digital engine control unit in a four-cylinder, 100-horsepower powerplant is a first for the industry. The 912iS was tested in a Pipistrel, and produces a 38- to 70-percent increase in fuel efficiency compared to similar engines, the company announced.

The 912iS will offer the same 2,000-hour time between overhaul as other models in the line, producing lower emissions and burning less fuel.