Get the app Get the app
Already a member? Please login below for an enhanced experience. Not a member? Join today
News & Media Search homing in on Earhart's airplane

Search homing in on Earhart's airplane

Seventy-five years after Amelia Earhart’s disappearance in the Pacific, a nonprofit group has announced it will launch the most intensive effort yet to find pieces of her wrecked airplane and solve the mystery of where her flight ended. The International Group for Historic Aircraft Recovery (TIGHAR) says new evidence has given them reason to believe Earhart’s Lockheed Electra may be in deep water off an uninhabited atoll called Nikumaroro. Earhart and navigator Fred Noonan went missing on July 2, 1937, while trying to find Howland Island, an atoll 356 nautical miles to the north that had been equipped as a refueling station. 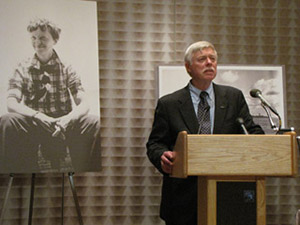 Ric Gillespie, executive director of TIGHAR, describes plans for a July expedition that will attempt to confirm the location of Amelia Earhart’s airplane on the seventy-fifth anniversary of her disappearance.

TIGHAR has spent 24 years and carried out 10 archeological missions to investigate Earhart’s disappearance so far. Ric Gillespie, TIGHAR executive director, said that the privately funded $2 million, 10-day expedition it will launch in July will help finally answer the question of where Earhart’s flight ended. It was prompted by the recent review of a photograph a British soldier took during a survey of the island in October 1937, three months after Earhart’s disappearance. Experts believe the photograph captured the image of what could be landing gear from a Lockheed Electra sticking out of the water off the island.

TIGHAR theorizes Earhart landed safely at low tide on the reef, but rising tides a week later could have carried the aircraft out to sea, where it would have broken up and dispersed in deeper water.

“We have found some evidence on the island that has been promising, but was inconclusive,” Gillespie. “Finding the aircraft would make it conclusive.”

The expedition is TIGHAR’s highest-profile one to date, earning the endorsement of Secretary of State Hillary Clinton and oceanographer Robert Ballard at an event March 20 at the Department of State. Clinton said as a child she had harbored hopes of becoming an astronaut until NASA told her it wouldn’t be using women astronauts. “NASA may have said I couldn’t go into space, but nobody was there to tell Amelia Earhart she couldn’t do what she chose to do,” Clinton said. 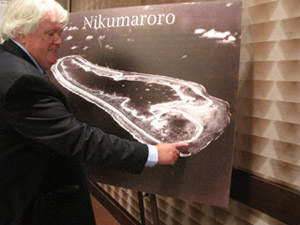 Art Carty, a TIGHAR board member, points to the area off Nikumaroro where the coming expedition will search for Amelia Earhart’s aircraft.

Researchers on previous archeological missions to Nikumaroro (formerly called Gardner Island) found artifacts that include women’s cosmetic bottles and glass possibly from a make-up compact of that era, a zipper pull made in Pennsylvania, and the remains of a jack knife of the same model Earhart was known to have brought with her. During its last mission in 2010, the researchers mapped parts of the island’s reef to a depth of 1,100 feet (300 meters) using sonar and a remotely operated vehicle (ROV). No wreckage was found, but they discovered the reef slope is very steep until it levels out at 1,100 feet, which was the limit of the ROV’s range. 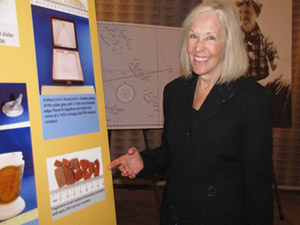 Lonnie Schorer, a volunteer who participated on a TIGHAR dig on Nikumaroro, found some reddish material buried on the island that may be make-up that Amelia Earhart could have carried.

On their return, researchers plan to map the area with multi-beam sonar, and will use two robotic vehicles with greater ranges to investigate areas of interest. If any wreckage is found, Gillespie said they will take only a small sample to confirm its identity and leave the rest for a later recovery, if possible.

And if the search doesn’t turn up any new evidence, “we’re hoping the expedition will inspire and encourage young people to search and do critical thinking,” Gillespie said. “It’s not what we find, but how we look. It’s important to use the scientific method of inquiry.” 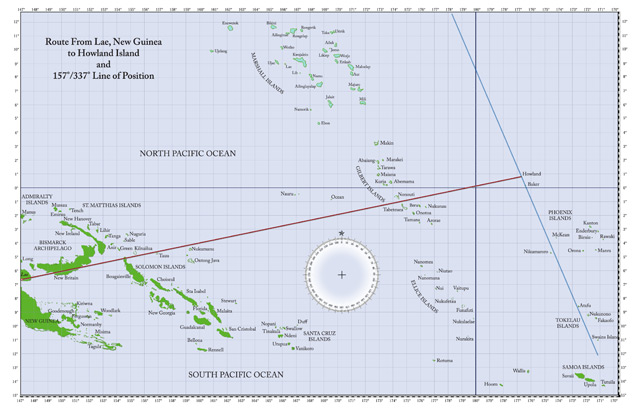 An expedition will launch in July to recover evidence of wreckage believed to be that of Amelia Earhart’s Lockheed Model 10 Electra, lost 75 years ago during her attempt to circumnavigate the globe. The airplane and its occupants were never found, in spite of a massive air and sea search that spanned 150,000 square miles of open ocean.

The nonprofit The International Group for Historic Aircraft Recovery (TIGHAR) will lead a deep-water research team to an island in the Pacific chain of atolls known as the Phoenix Islands. There, a University of Hawaii vessel will conduct a detailed search and mapping of the area.

Taken three months after Earhart’s disappearance to document a freighter that ran aground on Nikumaroro in the 1920s, experts think it may also show the landing gear from a Lockheed Electra sticking out of the water to the left. Click image above for larger photo. Photo credit: TIGHAR.

The new search stems from a clue that has been spotted in the original negative of a photo of the western shoreline of Nikumaroro. The negative shows a protrusion from the reef resembling the landing gear of an aircraft. Photo analysts from the State Department have indicated that it appears to be the landing gear of a Lockheed Electra, he said.

“That put us on course,” said TIGHAR Executive Director Ric Gillespie, whose group has searched for Earhart’s airplane for years, Gillespie wrote a 2006 book, Finding Amelia.

“If you ever want a case of finding a needle in a haystack,” Earhart’s disappearance is it, said Robert Ballard, professor of oceanography and president of the Ocean Exploration Trust. “I was totally convinced it couldn’t be found.” Ballard, whose previous explorations have led to the discoveries of the RMS Titanic, the USS Yorktown, and the torpedo boat PT-109 commanded by John F. Kennedy during World War II, said he was brought in to review TIGHAR’s research strategy. “[Gillespie] has collapsed the box,” he said.

Calling it a “remarkable day,” Secretary of Transportation Ray LaHood on March 20 said the voyage to recover Earhart’s aircraft is only possible because of what Earhart accomplished as a record-setting pilot. “Because of Amelia Earhart, our world is smaller,” he said.

“Amelia Earhart may have been an unlikely heroine for a nation down on its luck, but she embodied the spirit of an America coming of age and increasingly confident, ready to lead in a quite uncertain and dangerous world,” Secretary of State Hilary Rodham Clinton said. “She gave people hope and she inspired them to dream bigger and bolder. When she took off on that historic journey, she carried the aspirations of an entire country with her.”