Get the app Get the app
Already a member? Please login below for an enhanced experience. Not a member? Join today
News & Media Hawker Beechcraft ponders surveillance mission for Baron 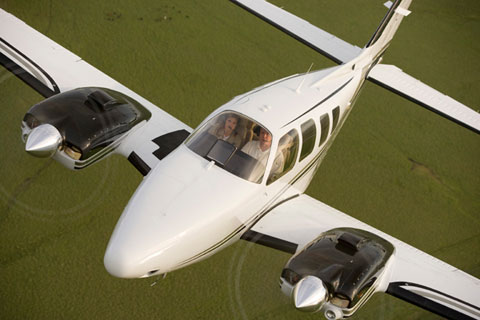 The Beechcraft Baron G58 may get a new mission: spy plane.

The venerable Baron 58, Hawker Beechcraft's last and arguably the greatest of the light piston twins, a general aviation mainstay, may get a new mission as a spy plane, according to Hawker Beechcraft officials.

First introduced in 1969, the Baron 58 (now the G58, with the addition of a glass cockpit on new models) is a slightly larger cousin of the Baron 55 introduced in 1961, and remains in production to the present day. The piston twin is known for its ramp presence and its steady flight characteristics, and can manage a useful load of 1,504 pounds. As modern electronics have slimmed down, the potential for configuring the long-serving Baron for airborne intelligence, reconnaissance, and surveillance missions has emerged.

Jay Gibson, vice president of special missions at Hawker Beechcraft, said the Baron could soon join the King Air turboprops and other models already in service for military and intelligence applications.

“With available modern technology sensors, we continue to look for ways to further develop and enhance our entire line of products to demonstrate ISR capabilities—including the Baron G58,” Gibson said.

Hawker Beechcraft is working with various electronics manufacturers to develop packages of aircraft and electronics for military and intelligence applications.