Apollo astronaut looks to the future at Sun 'n Fun 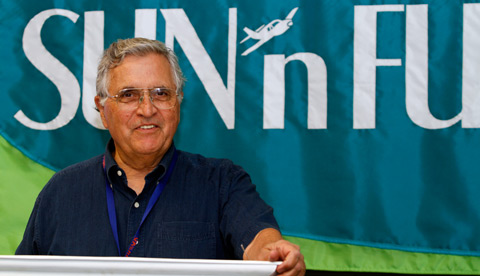 Forty years ago, Harrison Schmitt set foot on the moon, emerging from the Apollo 17 lunar module in a valley deeper than the Grand Canyon.

“The earth was hanging over one of those mountains,” Schmitt recalled March 28 at Sun ’n Fun in Lakeland, Fla., offering a sneak preview of an evening program planned for 8 p.m. A black sky framed a brilliant sun, and Schmitt—a geologist—would collect one of the most important samples ever returned to earth, a piece of volcanic glass still studied to this day as scientists attempt to settle debate about the origin of earth’s celestial sister.

Schmitt, who went on to serve as a U.S. senator from New Mexico, said there is a strong case to be made for a return trip, both for commercial and geopolitical reasons.

The moon is a rich source of Helium 3, an isotope in short supply that could prove a fantastic source of energy in fusion reactors. One hundred kilograms, or 220 pounds, could fuel a gigawatt power plant for a year.

A more compelling reason, perhaps, to return to deep space is found to the east, where China is aggressively pursuing manned lunar flight—and the control of space and prestige that come with it.

“We are in a cold war again,” Schmitt said, and “now China is the primary adversary.”

Rebuilding an American space program capable of reaching the moon, Mars, and beyond will require a vision and leadership that has been lacking in recent administrations, Schmitt said, noting that plans to replace the space shuttle ground to a halt leaving the U.S. dependent on Russia, or fledgling commercial operations that have yet to be proven, for access to space.

“That has given us a very, very serious disadvantage,” Schmitt said. “It’s going to take leadership, a president who understands the geopolitical consequences of not being a leader.”

Schmitt planned to present a detailed show, including images from his lunar expedition, at 8 p.m. March 28 at Sun ’n Fun.