At 10:25 on Easter morning in 2010 I held up my hand to shield the sun as I searched for the traffic at my two o'clock, 1,000 feet above. The air was smooth at 11,500 feet, above solid clouds and the rugged Washington Cascade mountains below. My family--parents, wife, kids, spouses, grandchildren--had gathered for the holiday that weekend, and now I was getting everyone home. 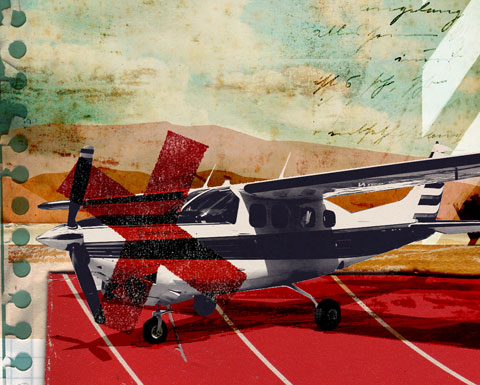 At 10:25 on Easter morning in 2010 I held up my hand to shield the sun as I searched for the traffic at my two o'clock, 1,000 feet above. The air was smooth at 11,500 feet, above solid clouds and the rugged Washington Cascade mountains below. My family—parents, wife, kids, spouses, grandchildren—had gathered for the holiday that weekend, and now I was getting everyone home.

Listen to this month's "Never Again" story: A rather important meeting. Download the mp3 file or download the iTunes podcast.

Until, that is, the number-two exhaust valve failed, scattering pieces throughout the inside of my Cessna P210’s engine. All I knew was that the engine quit without a sputter or a shake.

I had lost the engine over inhospitable terrain, hidden by a cloud layer of unknown thickness. My right hand firewalled the mixture, throttle, and prop, and started trimming the airplane for an 80-knot glide, while my left hand hit the mic button long enough to transmit, “Mayday, Mayday!”

ATC heard my “Mayday” and I asked for radar vectors to the nearest airport, Lake Wenatchee State. They told me to head 092 degrees, and I set the heading bug on the HSI.

I was trying everything to restart the engine. With the mixture about half-way back, the engine started and kept running for about 10 seconds at very low power, and then it died. I tried again. Again, it died. Suddenly, the prop, which had been smoothly windmilling, slammed to a stop, vibrating like the tines of a tuning fork. Two broken pieces of the number-two piston had jammed between the crankshaft and the crankcase, causing the engine to seize. I didn’t know all this, but it sure seemed like something had jammed inside the engine.

I kept both hands lightly on the yoke and glanced at the attitude indicator and HSI, making a minor correction to resume 092 and returning my eyes to the windscreen. Checking the instruments seconds later I was surprised to find myself headed 20 degrees to the left (and most likely banked 20 degrees as well).

I banked to the right. I leveled the wings according to the attitude indicator and looked up again for mountains and ridges. I glanced down to check the heading and saw that I was again 20 degrees to the left. When I lost the engine, the vacuum pump had quit operating. The attitude indicator gyro was winding down, and unknowingly I was putting the aircraft into a turn by following the dying instrument. The airplane had a back-up electric vacuum pump, so I flipped it on, and the attitude indicator righted itself.

I checked the altitude and noted: Radio contact lost at 7,500 feet.

Six thousand five hundred feet came and went without breaking out of clouds.

At 5,500 feet the clouds thinned and exposed a mountain to my left. I turned right before the clouds thickened again and camouflaged the mountains.

At 4,500 feet, I was still in the clouds, but the MFD showed me over the west end of Lake Wenatchee. The airport was the same elevation as the lake, so crashing into a mountain was no longer my concern. Now I needed to break through the clouds with enough altitude to try to find a place to put the airplane down.

I was still 3.9 miles from the airstrip and after some quick mental calculations, figured I would end up in the trees one mile short. Below me was what appeared to be a snow-covered field. I dropped the gear, set full flaps, and started an aggressive slip, trying to create as much drag as possible. I was two feet off the ground, watching the trees at the end of the field quickly increase in size as I neared. I decided to hold the airplane steady and allow it to hit a fence post if necessary—at least I would be at a good attitude and under control.

Wham. Later inspection showed the nosegear and fence post had destroyed each other, but I was holding steady. Seventy yards later the main gear settled down through the snow and buried itself deep in mud. The airplane slowed so quickly that in the next 200 feet there wasn’t enough speed to keep the wings level. The left wing dipped, tapped the ground, and bounced up, forcing the right wing to the ground, slewing the airplane to the right before stopping.

I got on the radio, calling on the emergency frequency. A United flight picked me up and relayed to ATC that I was down and OK.

The NTSB later determined that the fragments of the exhaust valve entered the cylinder, shattering the piston inside and smashing the spark plugs. If the P210 had not been turbocharged, all the debris would have exited the engine unencumbered through an open exhaust pipe, resulting in an underpowered (one cylinder down), shortened flight to the nearest airport. As it is, the P210 is turbocharged, and the exhaust leaving the engine rotates a turbine on its way out, powering the intake compressor of the turbocharger. The shrapnel got caught in and jammed the turbine, stopping it and plugging the exhaust path for the still-operating cylinders—thus incapacitating the previously unaffected cylinders, and stopping the factory-new engine.

Norris Brown has more than 1,700 hours, and has purchased another P210.