Get the app Get the app
AOPA will be closing at 1:45pm ET on Tuesday, December 6th. We will reopen Wednesday morning at 8:30am ET.
AOPA Members DO more LEARN more SAVE more - Get MORE out of being a pilot - CLICK HERE
News & Media Jetman makes Rio de Janeiro flight 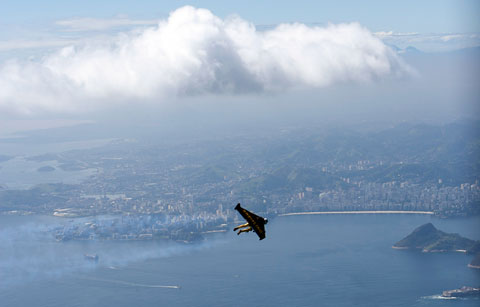 Yves Rossy, the “Jetman,” cruises above Rio de Janeiro May 2, using his body to control the flight of a rigid wing strapped to his back and powered by four small turbine engines. Photo courtesy Breitling/www.jetman.com.


Yves Rossy checked another scenic ride off the to-do list, darting past Christ the Redeemer at speeds topping 180 mph with four tiny turbines and a small, rigid wing strapped to his back—along with a parachute. 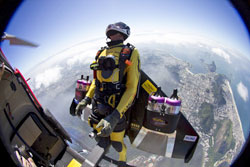 Yves Rossy, the “Jetman,” launches from a helicopter for a flight over Rio de Janeiro sponsored by Breitling on May 2. Photo courtesy Breitling/www.jetman.com.

For Rossy, it was the latest feat in a series of remarkable flights. He remains, according to a news release, the only person in the world to fly with a jet-powered rigid wing, controlled with a throttle and the movement of his body.

Rossy, whose aviation career includes service as a fighter pilot and airline pilot, started building his flying wing in 1993, and has since refined the design. In 2008, he crossed the English Channel, and in 2011 he overflew the Grand Canyon. Sponsored by Swiss watchmaker Breitling since 2010, Rossy has also flown formation with two L-39C Albatros jets from the Breitling Jet Team.