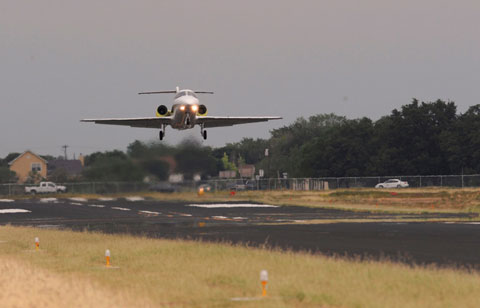 Hawker Beechcraft announced May 7 the maiden flight of the Hawker 400XPR, though some upgrades of the Hawker 400XP/Beechjet 400A are still to come. The May 3 flight, which was previously announced by contractor Sierra Industries, took place the same day attorneys for the cash-strapped general aviation giant made their first appearance in bankruptcy court: Hawker Beechcraft on May 4 secured permission to continue operations during a Chapter 11 process that is likely to last about year.

The 400XPR upgrades include new engines: High-bypass Williams International FJ44-4A-32s with full authority digital engine control (FADEC) will replace the Pratt & Whitney JT15D-5 turbofans, enhancing performance while reducing noise. Winglets, which have yet to fly, also will be added, along with a Rockwell Collins Pro Line 21 avionics suite.

The modifications will be available as upgrades to the fleet of 604 eligible Hawker/Beechjet 400 models; factory new models will also be sold—a program that Hawker Beechcraft hopes will boost its bottom line during the bankruptcy process, and after. Certification is expected in September.

“We continue to see great demand for this upgrade in the market and look forward to certification and deliveries commencing later in the year,” said Christi Tannahill, senior vice president of Hawker Beechcraft Global Customer Support, in the company announcement, calling the maiden test flight a “major milestone.”

Sierra Industries completed the engine installation in Uvalde, Texas, and reported that company CEO Mark Huffstutler flew left seat, alongside Hawker Beechcraft test pilot Dave Newton for a first flight. The jet climbed to 5,000 feet in one minute, and eventually reached 14,000 feet and 320 knots during the maiden voyage, Sierra reported.

Sierra Industries reported the Williams turbofans, producing 3,200 pounds of thrust, will extend the range of the 400XPR by 450 nautical miles, to 2,015 nm with maximum fuel, over the 400A and 400XP models.