Get the app Get the app
News & Media 'For real?' Sporty's sweeps winner stunned

Pilots took a break from chowing down on hot dogs, hushed their chatter, and gathered around Sporty’s 2012 Sweepstakes G300-equipped Cessna Skycatcher hoisted high in the company’s atrium—they had a stake in what was about to happen, silence was essential.

“If your phone starts ringing in a couple of seconds, that would be really cool,” Sporty’s President Michael Wolf said May 19 as he dialed the winner. The announcement took place during the annual Sporty’s fly-in at Clermont County Airport in Batavia, Ohio. Unfortunately, no cell phones sounded in the atrium. 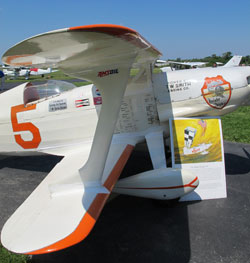 The Knight Twister Imperial, dedicated to the EAA AirVenture Museum in Oshkosh, Wis., in 1989, made an appearance at the Sporty's fly-in.

After several rings, U.S. Army Reserve Lt. Col. Matthew Smolin of Germantown, Tenn., answered what he may have thought was a prank call. “For real?” he finally asked Wolf after a long period of silence. The Skycatcher, which Sporty’s is making arrangements for Smolin to receive, will be a little different than his usual ride—a Seneca. Despite their own disappointment over not winning the light sport aircraft, attendees gave Smolin a resounding applause once they learned of his service to the country. Based on the number of pilots sporting AOPA baseball caps, most still have a chance to win an aircraft this year—AOPA’s 2012 Tougher than a Tornado Husky, which will be given away during AOPA Aviation Summit in Palm Springs, Calif., in October.

The event also honored Rudy Frasca, who has flown 50 of his 81 years, as the 2012 NAFI Flight Instructor Hall of Fame Inductee. Peggy Prichard accepted the honors on behalf of her father, the founder of simulator company Frasca Aviation (now Frasca International), who was not able to attend. Frasca built his first simulator in his garage in 1958.

Sporty's hosts a hot dog fly-in every Saturday but goes all out with an aircraft display, exhibits, and educational seminars for its annual event in May.

Meanwhile, pilots tried their hand at a power-off, short-field landing competition on a Frasca flight simulator. Some crashed, others overshot the runway. Many managed to land in 2,400 feet or less, while the instructors leading the simulator booth stopped in less than 170 feet. (Maybe pilots just needed to get used to the feel of the simulator.) 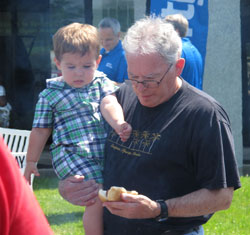 Airplanes and fly-ins attract all ages.

The landing contest was one of several educational opportunities throughout the day that also included seminars about Garmin and Aspen avionics, in-cockpit video cameras, and iPads in the cockpit.

Sporty’s Founder Hal Shevers presented $1,000 to Honor Flight from the Sporty’s Foundation and a matching personal donation from he and his wife to send six veterans to Washington, D.C., to see the World War II monument. Honor Flight provides free transportation for World War II veterans to visit the memorials in the nation’s capital dedicated in honor of their service.

More than 100 aircraft flew in for the free hotdogs, aircraft display, exhibits, educational seminars, and of course, the chance to win the sweepstakes aircraft in person. To encourage pilots to fly year round, Sporty’s also hosts a hot dog fly-in every Saturday.